India should push for underwater gasline

The chamber said that India can finally connect to Gulf region, where more than 7 million Indians reside. 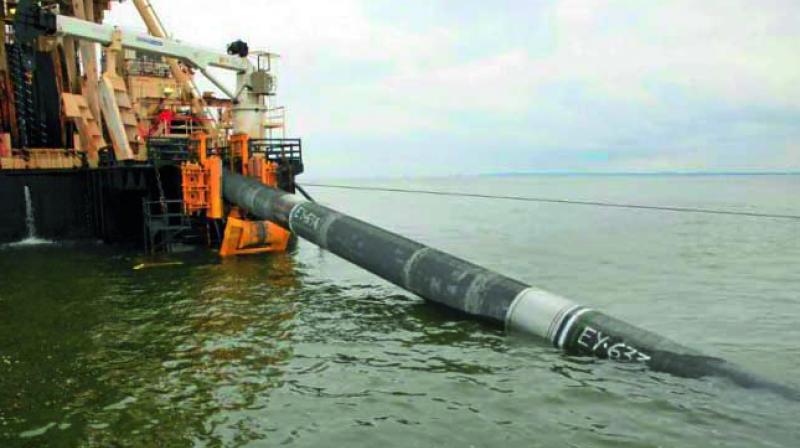 Releasing the study on the Iran-India gas pipeline, former oil secretary T.N.R. Rao said natural gas imported through the over $4 billion line would cost $5-5.50 per million.

New Delhi: if India has to feedstock its power, fertiliser and steel plants in an environment-friendly and affordable way, it must  push for a transnational deepwater gas  pipeline from Iran, passing through Oman but bye-passing Pakistan for a sustainable supply of the industrial fuel, an  study said on Tuesday.

Releasing the study on the Iran-India gas pipeline, former oil secretary T.N.R. Rao said natural gas imported through the over $4 billion line would cost $5-5.50 per million.

British thermal unit at the Indian coast, cheaper than the rate at which some of the domestic fields supply gas. This could save around $1 billion annually. Liquefied natural gas (LNG) imported through ships costs about $7.50 per mmBtu, it said.

Mr Rao is the chairman of the advisory board of South Asia Gas Enterprise Pvt Ltd (SAGE) — the firm wanting to lay the undersea line — said the pipeline can first travel to Oman, and then onwards to Porbandar in Gujarat.

“An undersea pipeline between Iran-Oman-India will connect the producers and consumers of gas directly. This will bypass all geo-political issues. It will also lead to more gas-to-gas competition and creating a genuine gas hub, as in Europe/USA,” the Assocham study suggested.

The chamber said that India can finally connect to Gulf region, where more than 7 million Indians reside. It said during the year 2016-17, India consumed 55,534 MMSCM (million standard cubic meter) of natural gas of which 24,686 MMSCM was imported.

The country imports LNG and gasifies the same for domestic use. India is now the fourth largest natural gas importer, mainly from Qatar - the world’s largest gas exporter.

Assocham said in fact, the pipelines in Europe for carrying gas from Russia came up to avoid geo-political issues only. "Point to note is that 72 percent of LNG trade takes place in Asia. India is among the fastest developing market," it said.

The study said India must take a stronger and more pro-active approach to build a least one transnational gas pipeline in next five years. Currently 2500 MW gas based power generation capacity is idle, due to non-availability of low priced gas (and LNG being unaffordable), it said.

"No new fertiliser plants are being set up for same reason. There are several Indian steel plates and steel pipe manufacturers and construction companies which will gain sizeable business from the proposed pipeline, to promote / boost 'Make in India' and  'Skill India' Campaigns of Prime Minister," it said.

The chamber said Indian manufacturers have the capacity to supply required steel pipes for laying the pipeline. "Steel may also be sourced from Japanese and European companies. Both India and Iran can guide sourcing of material based on the best interests of their respective economies," it said.

"The advantage of having gas through pipelines are primarily long time gas supply/purchase contract, made at fair price, enabling new capital investment in projects of gas receiving countries. This can likely save almost a billion US Dollars annually for the country too, for the contract duration of 20/25 years," it added.