Two declarations and seven pacts in defence, cyber, mining and other sectors were announced after 'India-Australia Leaders’ virtual summit 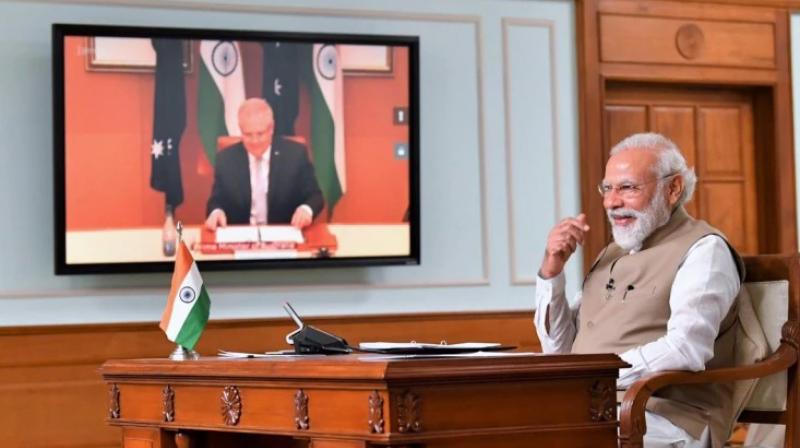 New Delhi: India and Australia on Thursday announced two bilateral strategic declarations for cooperation in the Indo-Pacific region and inked seven other pacts including a key defence Mutual Logistics Support Agreement (MLSA) that will see either country’s defence platforms including ships and aircraft being able to use the other’s bases for repair and replenishment of supplies including fuel and spare parts.

India already has similar pacts with the United States, France and Singapore. The MSLA inked on Thursday is designed to “increase military inter-operability through defence exercises”, with both nations resolving to “deepen and broaden defence cooperation” especially through “navy-to-navy cooperation”.

The two declarations and seven pacts in defence, cyber, mining and other sectors were announced after a 70-minute “warm, cordial and highly productive” India-Australia Leaders’ Virtual Summit on Thursday morning in which Prime Minister Narendra Modi and Australian counterpart Scott Morrison formally decided to elevate bilateral ties from the current Strategic Partnership to a Comprehensive Strategic Partnership (CSP), spanning the entire gamut of the relationship. The two countries had originally entered into a strategic partnership in 2009.

The inking of the MSLA is being seen by observers as significant, in the context of growing Chinese military assertiveness in the maritime Indo-Pacific region and also at a time when India is currently locked in a  military face-off with China in the Ladakh sector.

India and Australia along with the United States and Japan are already part of the four-nation "Quad" arrangement that focuses on maintenance of a "rules-based order" in the Indo-Pacific region. This has also brought India and Australia much closer to each other strategically.

In response to a question later from reporters at a Special Virtual briefing on Thursday evening, the Ministry of External Affairs (MEA)'s Secretary (East) Ms. Vijay Thakur Singh said there was no discussion on the subject of China at the Summit. But in what is being seen as possibly a veiled reference to Beijing, PM Modi told Australian PM Morrison during the Summit, “ It is our sacred responsibility to uphold and protect the values of global welfare, such as Democracy, Rule of Law, Freedom, Mutual Respect, Respect for International Institutions and Transparency, etc. Today, when these values are being challenged in different ways, we can strengthen them by strengthening mutual relations.”

The two bilateral declarations announced included one on the CSP and one on a Shared Vision for Maritime Cooperation in the Indo- Pacific that will “expand linkages between maritime agencies” and “support a rules-based maritime order that is based on respect for sovereignty and international law”, seen as crucial in the light of China’s strong-arm tactics in the region. PM Modi also used the metaphor of musical instruments to say the both countries can “create a symphony”in the Indo-Pacific region.

Apart from the MSLA, Another defence pact on cooperation in Defence Science and Technology was also signed, with PM Modi inviting Australian companies to participate in the “Make in India” initiative. Answering a question on key defence pact MSLA, top MEA officials said that whenever there are military exercises between India and Australia, the two militaries “would be extending support to each other”.

Another important pact inked was on cooperation in the field of mining and processing of Critical and Strategic minerals that is expected to include minerals like Lithium and Cobalt as well.

Australia also “conveyed that India could consider it as a stable, reliable and trusted supplier of high-quality mineral resources to India”. Both sides also “reiterated their support for continued bilateral civil nuclear cooperation”, with Australia being already a key supplier of Uranium to India. Australia also expressed its “strong support” for India's membership of the Nuclear Suppliers Group (NSG).

Both leaders also agreed to “increase the frequency of Prime Ministerial contact” through reciprocal bilateral visits and annual meetings at the margins of international events and also decided that “Foreign and Defence Ministers will meet in a ‘2+2’ format to discuss strategic issues at least every two years”.

To strengthen trade ties, it was decided to re-commence talks on a bilateral Comprehensive Economic Cooperation Agreement(CECA) where a “mutually  agreed way forward can be found”. A Framework pact on Cyber and Cyber-Enabled Critical Technology Cooperation was also inked.

Without naming Pakistan, both sides “strongly condemned terrorism in all its forms” and “supported a comprehensive approach in combating terrorism” including “facilitating the investigation and prosecution of terrorist acts”.

In a lighter moment during the Summit that reflected the bonhomie between the two leaders, Australian PM Morrison---while referring to the popular Indian snack ‘Samosa’, said he hoped he could one day prepare a “Modimosa” and “Gujarati khichdi” for PM Modi.

Praising Mr. Morrison during the Summit, PM Modi said, “India-Australia relations are wide-ranging and deep. And this depth comes from our shared values, shared interests, shared geography and shared objectives. In the last few years, our cooperation and synergy has gained momentum. It is fortunate that one end of the reins of our relationship is in the hands of a strong and visionary leader like you. I believe that this is the perfect time, the perfect opportunity to further strengthen the relations between India and Australia.”

The Coronavirus pandemic was also discussed at the Summit, with PM Modi saying, “The role of our Comprehensive Strategic Partnership will be more important in this period of a global pandemic. The world needs a coordinated and collaborative approach to come out of the economic and social side effects of this pandemic. Our government has decided to view this crisis as an opportunity. In India, a process of comprehensive reforms has been initiated in almost all spheres. It will soon see results at the ground level.”

Again articulating what seemed to be New Delhi’s unhappiness with the Covid-response of the World Health Organisation (WHO), PM Modi suggested “in-built reform mechanisms in institutions”.