Growth has been stymied by competitive pressure: Survey 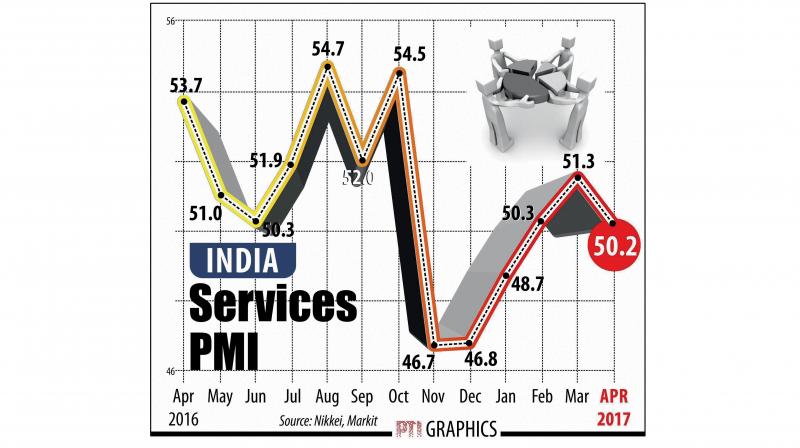 New Delhi: The growth in services industry in the country came close to stalling in April as challenging market conditions hampered pace of expansion, according to Nikkei India Services Purchasing Managers’ Index (PMI). However, this is straight third month that services has seen an expansion even though pace of growth has come down.

Nikkei India Services Purchasing Managers' Index (PMI) in April grew by 50.2 from 51.5 in March. Any number below 50 is contraction and over 50 means positive growth.

“Expansion has now been registered for three successive months, but the latest reading was the lowest in this period,” said the survey.

“April PMI data for the Indian service sector show how jittery the current economic environment is, igniting concerns among some businesses, despite remaining in growth territory,” said Pollyanna De Lima, economist at IHS Markit, and author of the report.

She said that slower and only marginal increases in new work and activity were seen in April, with these indicators close to the stagnation mark.

“Firms were cautiously optimistic towards future performance, and have been so for a while. The latest results indicate that the road to recovery from the notes ban is still bumpy and is a reminder that the sector is not out of the woods yet,” she added. “The rate of expansion in new business was only marginal overall, having softened from that registered in March,” said the survey.

It said that advertising campaigns supported the increase in services new work. There was, however, evidence that growth was stymied by competitive pressures, it said.

The survey said that Indian service providers responded to the sustained rise in new business by recruiting additional workers.

"Nevertheless, as was the case for output and new orders, the rate of job creation eased and was below the long-run survey average,” the survey said.

Meanwhile, backlogs of work at services firms increased slightly in April, extending the current period of accumulation to 11 months. Once again, the rise in outstanding business was linked by panellists to pending client payments, said the survey. The overall rate of inflation eased since March. This reportedly occurred due to lower fuel bills curbing the intensity to which costs rose.