With China being a key medical supplier, pharma industry is facing a crunch. 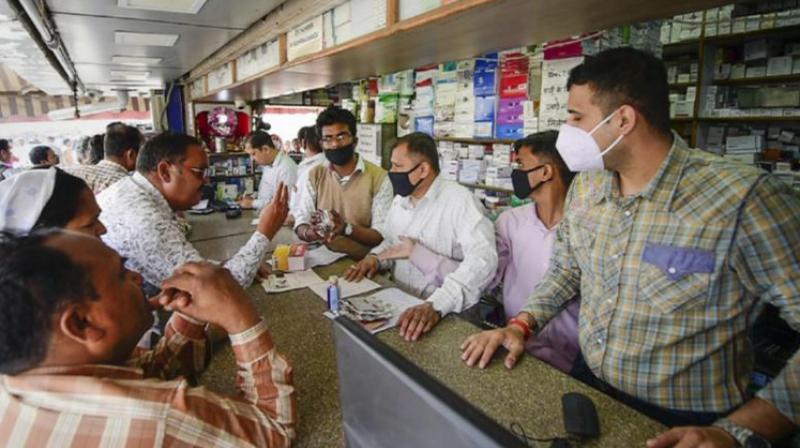 Salesmen at a chemist shop wear protective masks in wake of coronavirus outside Safdarjung Hospital in New Delhi. (Photo- PTI)

Hyderabad: The effect on pharmaceutical companies of the national lockdown has heavily impacted the supply of active pharmaceutical ingredients, especially from China, while the export of drugs to Europe and the United States of America has been curtailed.

The impact is particularly severe on biological medicines such as those used in the treatment of cancer, since they are transported by flights, which have been suspended.

Dr Arun Singh, an economist, explains, “raw material dependency on China is creating uncertainty regarding normalisation of supply chains. Since 85 per cent of active pharmaceutical ingredients come from China, till the lockdown in India ends, this problem will continue. Bulk drug intermediaries are imported from China (68 per cent), United States (four per cent) and Italy (three per cent). These too have been badly impacted. The production of in-house materials is continuing and that will ensure that the supply chain does not get too badly affected.”

The effect has been moderate in the case of vaccines and anti-viral drugs and other generic medicines for consumption in the country.

Pharma companies are also rotating their staff, one lot coming to work for office and laboratory work for a certain number of days and working from home on other days when another lot works in the office.

Production schedules have been chalked out according to the availability of the work force as many employees are not able to come to work due to the restrictions.

Rajiv Nath, forum co-ordinator of the Association of Indian Medical Device Industry said, “We have got some relief from states after continuous dialogue with them and with the local administration in the last one week. But there are many workers and officials who live close to inter-state borders and are unable to move despite having a pass.”