Business   In Other News  04 Jun 2020  India to let farmers sell produce directly to traders, retailers
Business, In Other News 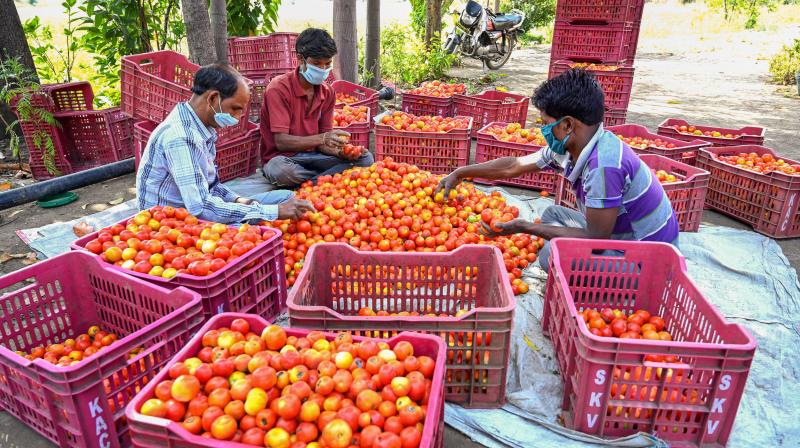 Farmers sort tomatoes near a field for their transportation to various markets during the nationwide lockdown. India is to allow farmers to sell produce directly to bulk buyers. (PTI Photo)

This would obviate the need for farmers to bring their produce to India’s more than 7,000 regulated wholesale markets and let buyers buy from the fields, Narendra Singh Tomar told reporters after a cabinet meeting chaired by Prime Minister Narendra Modi.

The cabinet agreed to pass an emergency executive order to change the rules.

India’s antiquated Agriculture Produce Marketing Committee (APMC) Act requires all farmers to sell their produce at the wholesale markets in most of the country’s 29 states.

The act was aimed at protecting farmers from exploitation by institutional buyers such as big trading houses, large retailers and food processors.

But many farmers saw the act as an impediment to selling directly to big buyers such as Wal-Mart Stores and Tesco which can give them attractive returns.

Also, an opaque system of auctions by middlemen’s cartels at wholesale markets leaves farmers with little bargaining power and adds an extra level of intermediaries, pushing up prices for consumers.

The coronavirus lockdown, introduced in late March, triggered a severe shortage of labour, crimping operations at wholesale markets - the only channel for getting food to India’s 1.3 billion people. The wholesale markets will operate as usual as the government hasn’t abolished the APMC Act, but it has now empowered farmers to sell directly to buyers.