Business   In Other News  04 Mar 2019  Tourist arrivals in Kashmir to dip this summer
Business, In Other News

Tourist arrivals in Kashmir to dip this summer

Some of the key source countries like the US, UK and Canada have released travel advisories for their citizens visiting the region. 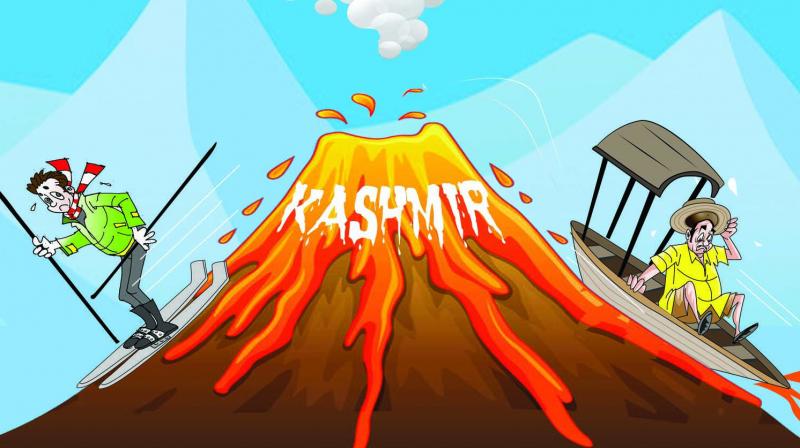 Tourist arrivals have been declining since 2016 due to the political unrest. In 2012, the state had received 13 lakh visitors.

Chennai: Continuing the trend since 2016, Kashmir is set to lose its tourism revenues this summer as well with the situation in the state remaining tense. After the issuance of travel advisories by some of the leading source countries, travel service providers are also dissuading tourists from choosing the destination.

Adverse conditions at a time when the bookings for the upcoming season have started will significantly affect the summer prospects.

"Our central tour management team is closely monitoring the current situation in Kashmir. Our teams are in touch with customers and are assisting them with optional destinations, postponing travel dates or providing a future travel voucher should they prefer to reschedule,' said Rajeev Kale, president and country head-leisure travel, MICE and Visas at Thomas Cook India.

In 2018, Kashmir witnessed the lowest arrivals in seven years. Only 8.5 lakh domestic and foreign tourists visited the valley last year, a decline of 23 per cent from 2017. Tourist arrivals have been declining since 2016 due to the political unrest. In 2012, the state had received 13 lakh visitors.

Some of the key source countries like the US, UK and Canada have released travel advisories for their citizens visiting the region. The US has strongly recommended avoiding travel to Jammu and Kashmir "because of the potential for terrorist incidents as well as violent public unrest". The advisory has exempted eastern Ladakh region and its capital Leh.

"In the current situation, summer travel to Kashmir will come down as holidaymakers are exploring other holiday destinations in North India. Tourists are switching to places in Uttarakhand and Himachal Pradesh. Bhutan and Nepal are also gaining more tourists due to the altered preference and rate of enquiries for these two countries also have gone up significantly. The impact on Ladakh is less and we see no cancellations as of now. A good numbers of tourists are also travelling to cooler places in south India like Coorg, Munnar and Ooty," said Neelu Singh, CEO and Director, Ezeego1.

Karan Anand, head, relationships, Cox and Kings finds that Leh, Ladakh and Nubra Valley will stand to gain in the coming summer holiday season. "For the upcoming season we expect people to switch to destinations that share the same topography and those that receive a fair bit of snowfall. Hill stations such as Manali and Rohtang Pass in Himachal Pradesh, Katao and Zero Point in Sikkim are expected to see a spike in the number of domestic Indian tourists. We expect a 20 per cent increase in numbers to these destinations," he said.