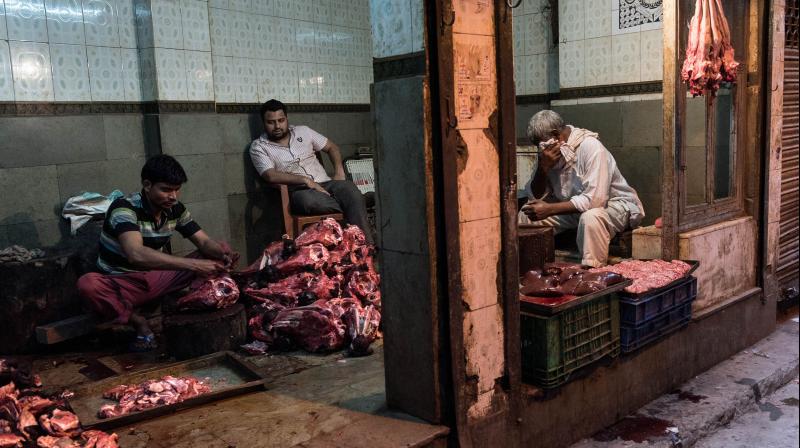 Indian butchers work in their shop as they prepare buffalo meat for sale in New Delhi. (AFP Photo)

But this year, the spread of coronavirus pandemic has slashed shipments of Indian buffalo meat, driving prices higher and hitting sales.

Most meat processing plants in India, the world’s second largest beef exporter and Malaysia’s top supplier, have been shut as the South Asian nation fights to contain the pandemic.

“The virus has really turned everything upside down,” Abu said.

India typically sells more than 100,000 tonnes of buffalo meat every month, but in March exports dropped to around 40,000 tonnes, according to two exporters.

Sales are likely to have been even lower in April as widespread lockdowns took effect, and even in May are expected to remain well below normal despite some parts of the Indian economy re-opening, they added.

“Right now things are not going in favour of our industry. Even though it is food, it is not considered essential as it is for exports,” said one of the exporters who is based in Uttar Pradesh.

“As of now all the exporters are trying to move their current stocks that they are holding.”

Wholesale prices of frozen buffalo meat in Malaysia have climbed 15%-20% from a year ago this month during the Ramadan festival, which usually accounts for up to 20% of the country’s annual consumption as families gather to break fast.

“Typically, Malaysians would consume about 350 containers of buffalo meat a month from India, now it has fallen to half,” said one importer based in Kuala Lumpur.

“We are only open for takeaway during the movement control order. Sales have dropped about 80%,” said Indian Muslim Restaurant Operators Association (Presma) president Ayub Khan.