Business   In Other News  03 May 2018  India's seafood exports register 13 per cent growth
Business, In Other News

India's seafood exports registered over 13 per cent growth during the first 10 months of FY 2017-18. 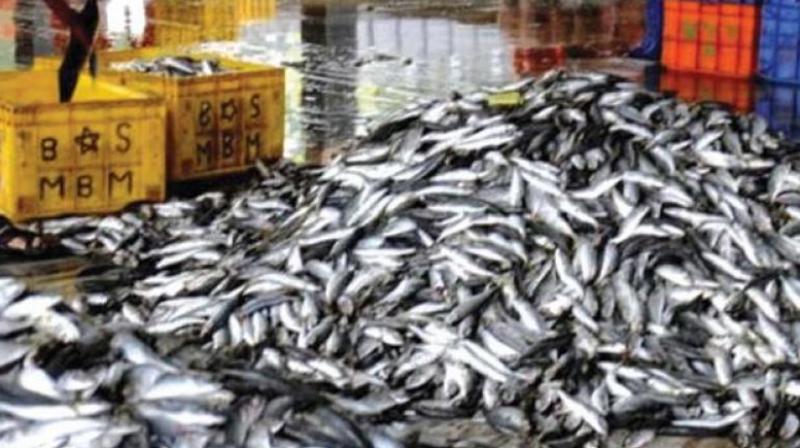 India's seafood exports registered over 13 per cent growth during the first 10 months of FY 2017-18.

Kochi: Strengthening its position as a leading supplier of quality frozen shrimp and frozen fish in international markets, India's seafood exports registered over 13 per cent growth during the first 10 months of FY 2017-18.

In dollar terms, exports were pegged at USD 5.64 billion during April 2017-January 2018 as compared to 4.98 billion dollars during the same period in the previous fiscal, marking a 13.27 per cent growth. USA, South East Asia and the European Union (EU) continued to be the three major importers while the demand from Japan registered substantial increase during the period.

Japan emerged as the major market for Black Tiger shrimp with a share of 49.38 per cent in dollar terms followed by USA (18.09 per cent) and South East Asia (15.06 per cent). "India's exports of seafood remained on the upward curve despite a fall in global shrimp prices triggered by oversupply from major shrimp-producing countries and more stringent test regimes imposed by the EU to detect antibiotic residues in frozen shrimp consignments," MPEDA, Chairman, A Jayathilak said.

He said steps had been initiated for export-oriented organic shrimp production while new strategies had been launched to boost aquaculture and improve vigilance to stop faulty consignments. Export of frozen fish stood at 279,642 MT as against 250,465 MT a year earlier, showing a growth of 11.65 per cent in quantity and 3.93 per cent in terms of dollar but frozen squid declined by 12.83 per cent, 18.35 per cent and 14.98 per cent, respectively in terms of quantity, rupee value and dollar earnings.

However,"exports of dried seafood items registered an uptick with figures of 80.63 per cent and 15.81 per cent in terms of quantity and rupee value, respectively, the release said. USA, which imported 2,03,837 MT of Indian seafood worth 1,917.38 million dollars in the current financial year, remained the major importer with a share of 33.99 per cent in dollar terms.

Frozen shrimp continued to be the principal item exported to USA with a share of 95.32 per cent in dollar terms. South East Asia, the second largest market destination of Indian marine products, accounted for 32.30 per cent in dollar value while overall exports to the region increased by 23.84 per cent in quantity and 16.25 per cent in rupee value.