The $1 billion hyperlocal online grocery space is heavily dominated by BigBasket and Grofers with a 71 per cent market share. 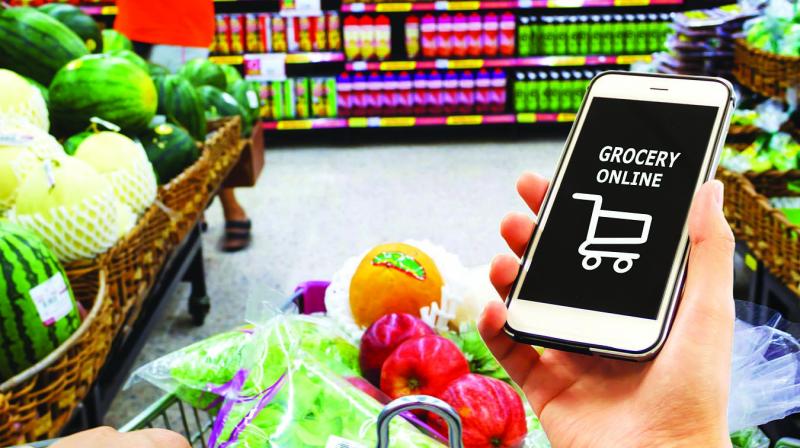 After they established themselves in the markets, several new players have entered the space in the past two to three years.

Chennai: Large vertical players are still enjoying the first-mover advantage in the hyperlocal online grocery space as new entrants have not been able to differentiate themselves and scale up faster in the space.

The $1 billion hyperlocal online grocery space is heavily dominated by BigBasket and Grofers with a 71 per cent market share. After they established themselves in the markets, several new players have entered the space in the past two to three years.

Among horizontal players, Amazon launched Pantry and Now, Flipkart has its Supermarket and Paytm Mall too is betting big on the essentials. However, all these players have been able to manage only 9 per cent share of the market. "In grocery, especially in perishable categories like vegetables and fruits, the companies have to be more focussed. With too many categories in hand, horizontals have not been able to allocate enough resources in just one category. However, a wide supply chain infrastructure is their advantage and will have to see how they focus on grocery category,' said Mrigank Gutgutia, head, consumer internet, RedSeer.

According to him, large vertical players - BigBasket and Grofers -have the first-mover advantage and have established themselves in multiple cities. Tie-ups with farmers and producers and brand trust allow them to be heavy on private label products, which support profitability.

A few smaller vertical players like Satvacart, SpiceBe and Kada have come up in select cities. But they are not able to scale up their model due to lack of differentiation and hence have just one per cent market share. Then there are providers of daily essentials like Supr, DailyNinja, Doodwala and Milkbasket who operate in micro-markets within specific cities. Though they have 9 per cent market share, scaling up is quite difficult as they focus on just five to six category of products.

Some of the offline supermarkets like Nature's Basket, Spar and Spencers have launched their omnichannel model and have grabbed three per cent market share. A few other players like Yellow Market and Your doorstep.in with wider assortment of products too have emerged in the space.

Specialised players in the meat category like Nandus Chicken, Lucious, Brown Apron and Zappfresh are witnessing faster growth and have grabbed 3 per cent market share. "But it is difficult to garner a high turnover with one product," said Gutgutia.

"Grocery is a category that needs focus in terms of user experience and brand trust. Management of supply chain and delivery cost too are key things to be taken care off. Many of the new entrants have not been able to differentiate their model yet," said Gutgutia.