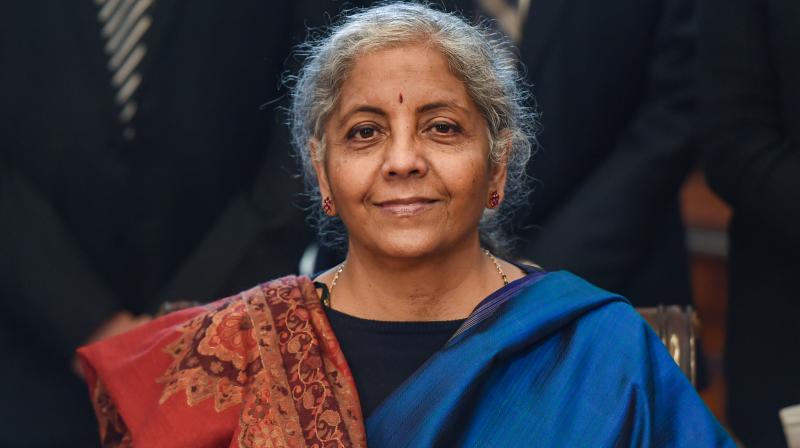 Union Finance Minister Nirmala Sitharaman during a pre-Budget photo session, on the eve of presentation of Budget 2022-23 in the Parliament, in New Delhi, Monday, Jan. 31, 2022. (PTI Photo/Manvender Vashist)

New Delhi: With a gradual recovery from the impact of the Covid-19 pandemic, the Indian economy is likely to grow with a ray of optimism on demand and consumption growth in the coming fiscal year, though there are some concerns over the implications of hardening inflation and oil prices. The gross domestic product, or GDP, is projected to grow by 8-8.5 per cent in 2022-23 and by 9.2 per cent in 2021-22 according to the first advanced estimates, subsequent to a contraction of 7.3 per cent in 2020-21.

“The year ahead is poised for a pickup in private sector investment with the financial system in good position to support the economy’s revival,” said the Economic Survey 2022, which was tabled by finance minister Nirmala Sitharaman in Parliament on Monday.

According to the Survey, the growth in the economy will be supported by widespread vaccine coverage, gains from supply-side reforms and easing of regulations, robust export growth and availability of fiscal space to ramp up capital spending. “The Survey has also focused a capex-driven initiative of the government for the next fiscal where the infrastructure spending will trigger a hike in growth. Apart from this, various high-frequency indicators like GST collections and corporate profitability have been projected towards significant upward movement,” the Survey said, adding that the projection was based on the assumption that there will be no further debilitating Covid pandemic-related economic disruptions.

Briefing the media, new chief economic adviser V. Anantha Nageswaran, who was appointed by the government just days before the presentation of the Survey, said: “The growth projection made by the Economic Survey is more conservative than other agencies. The capital expenditure by state governments has grown by 67 per cent in 2021-22.”

Mr Nageswaran replaced K.V. Subramanian, who demitted office as CEA in December 2021 at the end of his three-year term. On rising oil prices, Mr Nageswaran also said the $70-75 per barrel oil price estimate made for the next financial year by the Survey was an average price. “Thanks to the tightening of monetary policy globally and the lowering of the growth forecast in the developed world, the demand for oil will moderate. An assumption of oil prices in range of $70-75 for 2022-23 is reasonable despite the current oil price standing at $90… as the IMF predicts a slowdown in the growth of global economies,” the CEA said.

As per the Survey, agriculture and allied sectors have been the least hit by the Covid-19 pandemic and the sector is expected to grow by 3.9 per cent in 2021-22 after growing by 3.6 per cent in the previous year.

“However, the services sector has been the hardest hit by the pandemic, especially segments that involve human contact. This sector is estimated to grow by 8.2 per cent this financial year following last year’s 8.4 per cent contraction,” the Survey showed.

On the impact of the economy due to the pandemic, principal economic adviser Sanjeev Sanyal echoed the Survey’s findings, saying that the agriculture sector had been the least impacted but the services sector was the most affected by the lockdown. “It is just a little short of where it was pre-pandemic. Economic activities have also crossed the pre-pandemic levels. We expect the agriculture and allied sectors will grow by 3.9 per cent in the next fiscal year,” Mr Sanyal said.

The Survey also noted economic activity had recovered to pre-pandemic levels. It further added that the economy was well placed to take on the challenges of 2022-23. “However, robust export growth and availability of fiscal space will ramp up capital spending to support growth in the next fiscal,” the Survey showed.

On consumption, it showed that total consumption is estimated to have grown by seven per cent in 2021-22 with significant contributions from government spending. On the vaccination drive, the Survey showed that it was not merely a health response but was critical for opening up of the economy, particularly contact-intensive services. “Therefore, it should be treated for now as a macro-economic indicator.”

On the investment front, the Survey showed private sector investment would pick with the financial system in good position to provide support to a revival of the economy. “Gross Fixed Capital Formation (GFCF) is expected to see strong growth of 15 per cent in 2021-22 and achieve full recovery of pre-pandemic levels. The government’s policy thrust on the quickening virtuous cycle of growth via capex and infrastructure spending has increased capital formation in the economy, lifting the investment to GDP ratio to about 29.6 per cent in 2021-22, the highest in seven years,” the Survey said.

India Inc too cheered the Survey, saying the economy will now grow at a faster pace as per the projections. “The Survey’s GDP growth forecast of 9.2 per cent for this year and 8-8.5 per cent for next year will catapult India as the fastest growing major economy of the world for two years running. The strong growth momentum experienced this year has lent buoyancy to tax revenues, which will help to ramp up capital spending, thus exerting a multiplier impact on other sectors and supporting growth in the next fiscal too,” said CII director-general Chandrajit Banerjee. He said with the continuation of the impressive reform agenda coupled with an aggressive push on trade, India’s economy can reach the GDP target of $5 trillion by 2026-27.