The three countries are to work out details of the deal at joint working group meetings to be held inn the future. 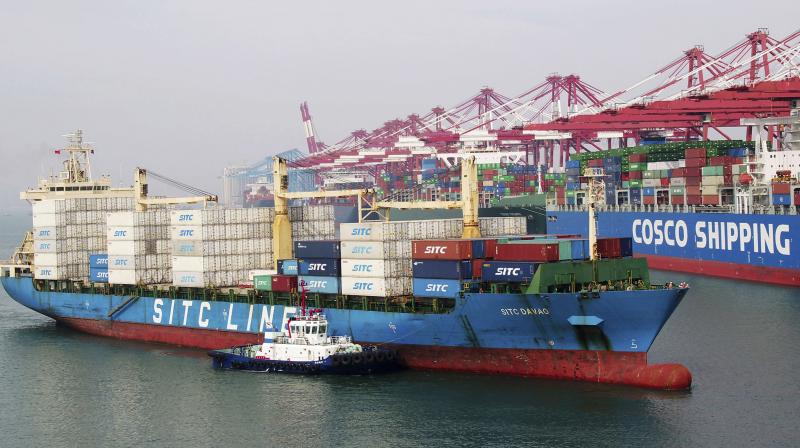 The three countries will jointly build the East Container Terminal at the Port of Colombo. (Photo: AP | Representational)

Colombo: Sri Lanka on Tuesday signed a deal with India and Japan to develop a deep-sea container terminal in the country that has seen increasing forays by China which has taken a strategic port on a 99-year lease that has worried New Delhi.

The three countries will jointly build the East Container Terminal at the Port of Colombo.

Sri Lanka's Port Authority (SLPA) said that around 70 per cent of Colombo Port's transshipment business is India related while Japan had cooperated since the 1980s to develop the port's container terminals.

"As a hub of the Indian ocean, the development of Sri Lanka and openness of its ports are of great importance. Colombo port is the leading port in region. This joint project reflects the long standing goodwill and cooperation among the three countries," the SLPA said.

The three countries are to work out details of the deal at joint working group meetings to be held inn the future.

The involvement of India and Japan is the project is being seen as a big development aimed at neutralising the growing influence of China, which has poured money into the South Asian island nation under its mammoth Belt and Road Initiative (BRI) infrastructure plan.

Sri Lanka has been one of the countries which became part of the China's Belt and Road Initiative, an ambitious plan announced in 2013 by President Xi Jinping to build an estimated USD 1 trillion of infrastructure to support increased trade and economic ties and further China's interests around the globe.

However, China's politically controversial investments in Sri Lanka became an election issue in 2015 and fuelled infighting between politicians in the capital.

India, the US and several other countries have been highlighting the concerns over the BRI projects which may leave a number of smaller countries in debt traps.

The concerns grew louder after China took over Sri Lanka's Hambantota port on a 99-year lease.

India's involvement in the latest project also became a reason for political infighting in the country.

In September last year, Sri Lankan President Maithripala Sirisena's reported opposition to India being given a stake in the East Container Terminal had created a political uproar. During a heated argument with Prime Minister Ranil Wickremesinghe in the Cabinet, Sirisena had argued against partnering India on the basis that it would be lucrative for Sri Lanka to do it themselves.