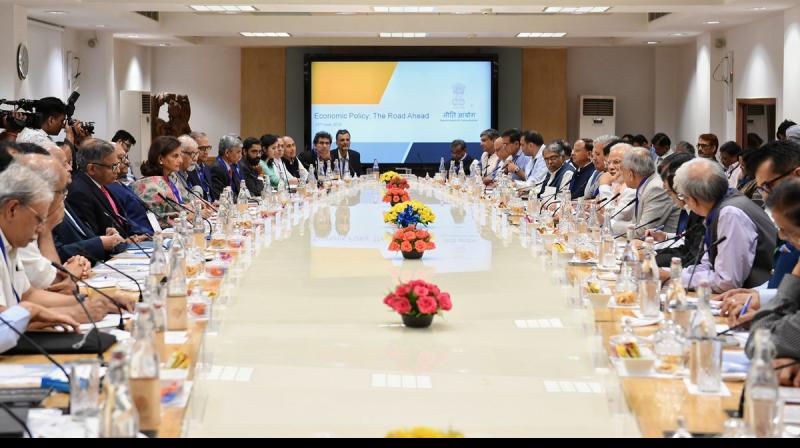 The session organised by Niti Aayog on 'Economic Policy - The Road Ahead' was attended by over 40 economists and sectoral experts. (Photo: Twitter @narendramodi)

New Delhi: Think tank Niti Aayog on Sunday said that expert panel for macroeconomics and employment came out with suggestions to achieve USD 5-trillion economy target during an interaction with Prime Minister Narendra Modi. Modi on Saturday had an interaction with economists and industry experts on India's current economic situation. "Expert committee for Macroeconomics & Employment presented their suggestions to PM @narendramodi for achieving the USD 5 Trillion economy target. Improvement of governance in PSU banks, enhancing growth rate of exports & employment generation were some of the key areas identified," the Aayog said in a tweet.

Improvement of governance in PSU banks, enhancing growth rate of exports & employment generation were some of the key areas identified. pic.twitter.com/IyjugcKPkc

During the interactive session, ahead of the presentation of the Union Budget next month, all participants made a case for "single minded pursuit" to achieve growth, according to sources.

A release issued by the Prime Minister's Office (PMO) had said that the session organised by Niti Aayog on 'Economic Policy - The Road Ahead' was attended by over 40 economists and sectoral experts.

Further opening of banking and insurance sectors for FDI, speeding up disinvestment process and management of water resources were also among the focus areas of Modi's interaction with economists and industry experts, they added.

"During the session, participants shared their views, in five distinct groups, on the economic themes of macro economy and employment, agriculture and water resources, exports, education and health," said the release.

The PMO release had said the Prime Minister thanked all participants for their suggestions and observations on various aspects of the economy. The Saturday meeting was also attended by Commerce and Industry Minister Piyush Goyal and Minister of State (independent charge) for Statistics and Programme Implementation Rao Inderjeet Singh. Niti Aayog Vice Chairman Rajiv Kumar, CEO Amitabh Kant and senior government officials were also present.

Finance Minister Nirmala Sitharaman will be presenting the full Budget for 2019-20 on July 5 in the Lok Sabha. It will be the first full Budget of the Modi 2.0 government.