India's gold imports could plunge in 2017

The plunge takes place after jewellers have aggressively restocked inventory ahead of a national sales tax that takes effect on July 1. 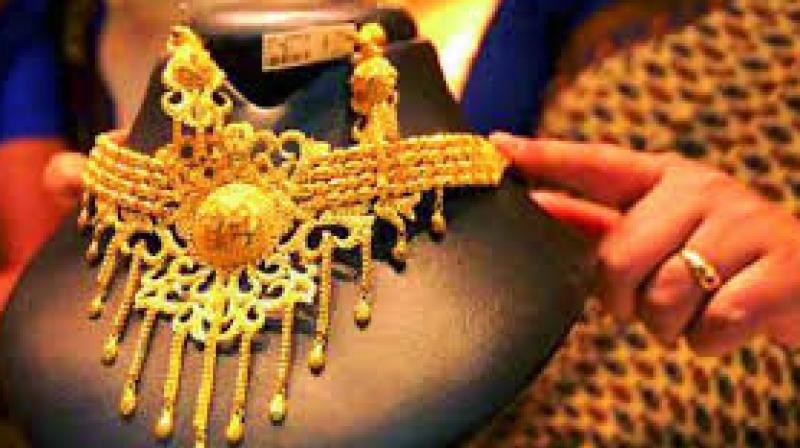 Mumbai: India's gold imports could plunge in 2017 during the traditional period of peak demand in the second half of the year, after jewellers have aggressively restocked inventory ahead of a national sales tax that takes effect on July 1.

Lower imports from the world's second-biggest consumer during its high-demand season could drag on global gold prices that have gained nearly 10 percent this year as political turmoil in the United States has raised expectations of a slower pace of interest rate hikes this year.

India's gold imports typically strengthen in the second half of a year as the precious metal is considered an auspicious gift at weddings and festivals such as Diwali and Dussehra.

But the timing of strong purchases looks backwards this year, as the implementation of a goods and services tax (GST) that will replace a slew of federal and state levies has buyers cramming their major activity into the first half of 2017.

"This (strong buying) trend will not continue in the coming months," said James Jose, secretary of the Association of Gold Refineries and Mints, referring to the tripling in the value of gold imports in April.

"Ahead of GST, some people are stocking up fearing higher tax, but demand has been falling (more recently)," he said.

India's gold imports could hit 450 tonnes in the first half of the year, more than double from the same period in 2016, according to Sudheesh Nambiath, a senior analyst at GFMS, a division of Thomson Reuters.

Imports could then fall to 250 tonnes in the second half, about 40 percent lower than a five-year average for the period of 403 tonnes, Nambiath said.

Gold imports in the second half of 2016 were 313.8 tonnes, up 60 percent compared with the first half of that year.

"Aggressive Indian buying is unlikely to be there in the second half like every year. Global prices need to find support from other sources like exchanged traded funds or have to correct," said a Mumbai-based dealer with a private bank.

Another reason for the first-half buying surge is that cash many jewellers deposited in banks because of demonetization last year has been routed back through official channels, allowing for the restocking of gold, Nambiath added.

In November, Prime Minister Narendra Modi scrapped 500- and 1,000-rupee banknotes - 86 percent of the value of cash in circulation - as part of a crackdown on corruption, tax evasion and militant financing.

Still, gold could start trading at discounts in India in the next few weeks as jewellers "are carrying far higher inventory than required," said a Mumbai bullion dealer with a global bank. "They have to bring imports down in coming months," he said.

Gold imports in May could drop to around 50 tonnes, Jose of the refiners' association said, from 85 tonnes in April. Lower gold imports could help Asia's third-biggest economy in containing a swelling trade deficit that hit its highest level in 29 months in April.

Imports of unrefined gold will also fall sharply in the second half as new rules allow only refineries accredited by the Bureau of Indian Standards (BIS) to import gold from June 1, said Jose of refiners' association.

"It will take at least six months for refiners to secure BIS accreditation. Many small refiners may fail to get accreditation," he said. India imported 142 tonnes of unrefined gold in 2016, according to data compiled by the World Gold Council.