PM-KISAN scheme to be rolled out Sunday; over 1 cr farmers to get Rs 2,000 each

The ministry in its statement did not mention the number of farmers who will get their first instalment of Rs 2,000 on Sunday. 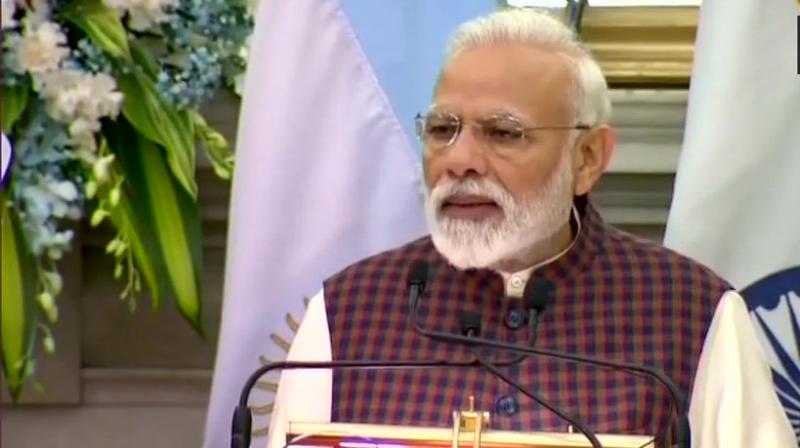 In the interim Budget 2019-20, the central government had announced the PM-KISAN scheme under which Rs 6,000 per year will be given in three instalments to 12 crore small and marginal farmers holding cultivable land up to two hectares. (Photo: ANI | Twitter)

Another one crore farmers will be covered in the next 2-3 days, the official said.

In the interim Budget 2019-20, the central government had announced the PM-KISAN scheme under which Rs 6,000 per year will be given in three instalments to 12 crore small and marginal farmers holding cultivable land up to two hectares.

The scheme has been made effective from this fiscal itself and as a result, farmers would get one instalment before March-end. This programme is part of the government's effort to address farm sector distress, caused by lower sales realisation on bumper production of foodgrains, oilseeds, sugarcane, cotton and horticulture crops.

"To provide an assured income support to the small and marginal farmers, the government is launching the Pradhan Mantri Kisan Samman Nidhi (PM-KISAN)," the Union agriculture ministry said in an official statement on Saturday.

The ministry in its statement did not mention the number of farmers who will get their first instalment of Rs 2,000 on Sunday.

However, the senior official said over one crore farmers from 14 states, including UP and Karnataka, will get their first instalment on Sunday and one crore more beneficiaries, spread over 28 states and one UT, would get their instalment in the next 2-3 days.

Explaining the modalities of cash dole, the ministry said this income support will be transferred directly into the bank accounts of beneficiary farmers, in three equal instalments of Rs 2,000 each.

"The Centre will transfer the amount to the bank account of the beneficiaries through State Notional Account. For transfer of benefit, district-wise beneficiaries' list has to be certified and uploaded by the states/UTs on the PM-KISAN portal of the central government," it added.

The funds would be electronically transferred to the beneficiary's bank account by the Centre through State Notional Account on a pattern similar to MGNREGS.

"PM-KISAN would not only provide assured supplemental income to the most vulnerable farmer families, but would also meet their emergent needs especially before the harvest season. PM-KISAN would pave the way for the farmers to earn and live a respectable living," the statement said.

A small and marginal landholder farmer family for the purpose of the calculation of the benefit has been defined as "a family comprising of husband, wife and minor children (up to 18 years of age) who collectively own cultivable land up to 2 hectare as per land records of the concerned State/UT".

The existing land-ownership system in the concerned states/UTs will be used for identification of beneficiaries. Those whose names appear in land records as on February 1, 2019, are eligible for benefit.