Two rakes of the luxurious Tejas Express will be launched by the Indian Railways later this year. 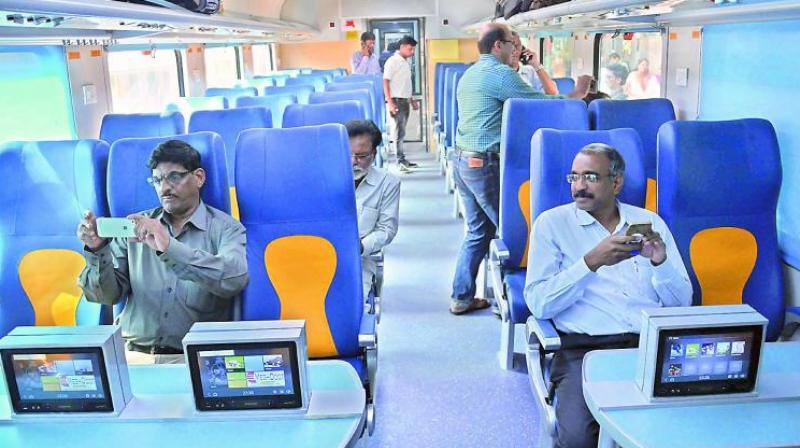 Mumbai: Good news for all those who have been waiting to hop on to Tejas Express, India’s first home-made luxury train. The bright yellow, sun painted express is all set to roll out on the Delhi-Chandigarh and Delhi-Lucknow routes as well.

Indian Railways is currently manufacturing two rakes of the Tejas Express in rail coach factories. They are expected to debut in September and November. “One Tejas Express rake will roll out by September this year and another one will be ready by November,” Railway Ministry spokesperson Anil Saxena said, in an article in Financial Times.

The railway authority is yet to take a call as to which rake would be used for which route. “We are yet to take a call on which route will get the Tejas Express from September and which from November. But, by November the plan is to roll the new luxury train out on both Delhi-Chandigarh and Delhi-Lucknow routes,” Saxena said.

The luxury train makes for a joyride as it boasts of premium features like attendant call buttons, reading lights, bio-vacuum toilets, personalised nine-inch LED infotainment screens, cushioned leg rests, headphones…the list can go on. Being hailed as the future of train travel in India, the Tejas Express was launched on the Mumbai-Goa route in May this year.

The IRCTC plans to make Rs 18 lakh in one year through advertisement revenue from the Tejas Express. The display screens, which had for so long been screening ad-free movies will now be allowed to display advertisements, reported Hindustan Times. IRCTC plans to get a contractor to install the arrangements to stream free movies, shows, documentaries and songs.

The contractor, who will be hired for three months, will also be charging passengers Rs30 for a pair of earphones.