135 million Indians may lose job due to coronavirus impact

The worst impact will be felt by India's most vulnerable in terms of job loss, poverty increase and reduced per-capita income 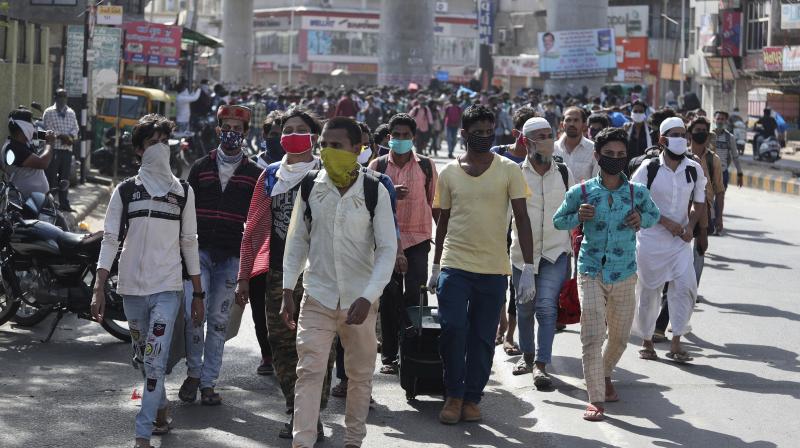 Migrant workers from other states trying to return to their homes arrives for transportation to a train station in Ahmedabad. (AP)

New Delhi: Following the COVID-19-induced economic disruptions, up to 135 million jobs could be lost and 120 million people might be pushed back into poverty in India, all of which will have a hit on consumer income, spending and savings, says a report.

According to a new report by international management consulting firm Arthur D Little, the worst of COVID-19's impact will be felt by India's most vulnerable in terms of job loss, poverty increase and reduced per-capita income, which in turn will result in a steep decline in the Gross Domestic Product (GDP).

The report titled "India: Surmounting the economic challenges posed by COVID-19: A 10-point programme to revive and power India's post-COVID economy" said the 'collateral damage' of the forecasted GDP slowdown, will be felt most acutely in employment, poverty alleviation, per-capita income and overall nominal GDP.

"Unemployment may rise to 35 per cent from 7.6 per cent resulting in 136 million jobs lost and a total of 174 million unemployed. Poverty alleviation will receive a set-back, significantly changing the fortunes of many, putting 120 million people into poverty and 40 million into abject poverty," the report said.

"India is headed towards a W-shaped economic recovery with a potential GDP contraction of 10.8 per cent in FY21. An opportunity loss of USD 1 trillion is staring India in its face," said Barnik Chitran Maitra, lead author of the report and Managing Partner & CEO of Arthur D Little, India and South Asia.

Maitra further said "for its USD 5 trillion vision, a radical economic approach is needed, centred on an immediate stimulus and structural reforms. The Prime Minister's visionary 'Atma Nirbhar Bharat Abhiyan' is a good start to this new approach."

The report lauded the steps taken by the government and the Reserve Bank of India, but said a far more assertive approach may be required given the magnitude of the adverse economic output.

The report suggested a 10-point programme to accelerate the recovery which includes strengthening the 'safety net' significantly for the most vulnerable, enable survival of small and medium businesses, restarting the rural economy and providing targeted assistance to at-risk sectors.

It further said the government should launch "Make in India 2.0" to capture global opportunities, build 'Modern India', accelerate Digital India and Innovation, strengthen global investment corridors with the US, UAE, Saudi Arabia, Japan and the UK, debottleneck land and labour and transform banking and financial markets in a bid to secure a sustainable economic future for 1.3 billion Indians.