Chief Minister Devendra Fadnavis announces that homeless would be provided houses by 2019. 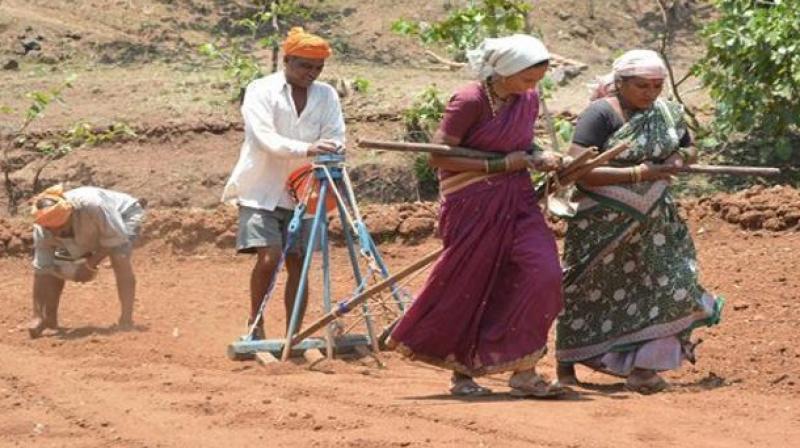 Farm loan waivers to farmers have been sugested to placate agricultural crisis in country. (Photo: PTI)

Mumbai: The Maharashtra government aims to make farmers of the state debt-free, Chief Minister Devendra Fadnavis on Tuesday said. He said this after unfurling the tricolour at the state secretariat 'Mantralaya' here to mark the 71st  Independence Day, which was celebrated with fervour across the state.

The chief minister also announced that the homeless would be provided houses by 2019 and construction of three lakh houses in the state under 'houses for all' scheme has begun. Every citizen should contribute to Prime Minister Narendra Modi's mission of creating a 'Nav Bharat' (New India), he said.

The Independence Day celebrations at some places in Maharashtra were marred by protests by farmers who sought to disrupt flag hoisting by district guardian ministers. Members of the steering committee comprising representatives of various farmer groups had on Saturday said that guardian ministers will not be allowed to unfurl the national flag at district headquarters on August 15 if the government fails to announce an unconditional loan-waiver.

"The loan-waiver announced by the BJP-led government in the state is full of flaws and riders. Those should be done away with," said Raghunanthdada Patil, a member of the committee.

"There should be a total loan-waiver for farmers. Only then will we allow ministers to unfurl the national flag," Patil had said. The state government had on June 24 announced a Rs 34,000-crore crop loan-waiver scheme for the state's marginal farmers.

Named as 'Chhatrapati Shivaji Maharaj Krushi Sanman Yojana', the scheme is designed to benefit about 89 lakh farmers. Under the scheme, farmers having outstanding loans between April 1, 2012 and June 30, 2016, would be entitled for the waiver.

Loans up to Rs 1.5 lakh would be written off immediately, making some 35 lakh farmers instantly debt-free. A one-time settlement scheme was offered to nine lakh farmers with debts of over Rs 1.5 lakh. They would be eligible for a waiver of 25 per cent of the outstanding amount or Rs 1.5 lakh, whichever was less, Fadnavis had said.