PM said note ban also led to doubling of I-T filers to 56 lakh and detection of over 3 lakh shell companies. 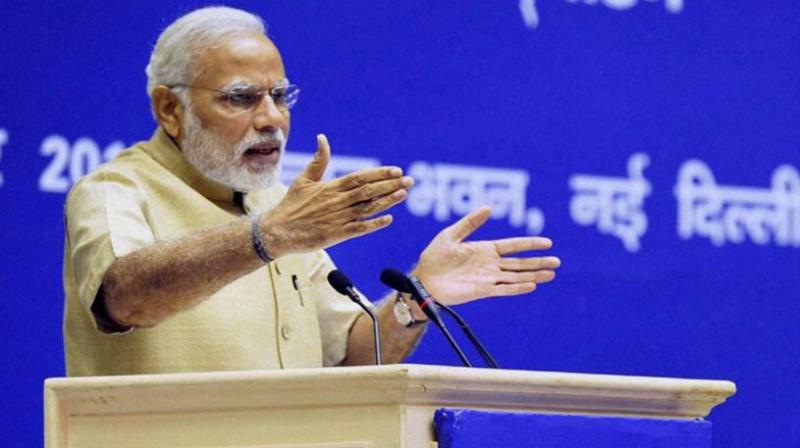 Addressing the nation on the 71st Independence Day, he said demonetisation of old Rs 500 and Rs 1,000 notes last November led to at least Rs 2 lakh crore of undeclared income coming into the banking system.

Besides, he said, it led to doubling of income tax filers to 56 lakh and detection of over 3 lakh 'shell' or paper companies that were used for money laundering. After withdrawing the legal tender status of high denomination currency, the government had given 50-day window for depositing the junked currency in bank accounts.

Note ban, according to independent research, helped bring Rs 3 lakh crore of unaccounted wealth into the banking system, Modi said in his fourth address to the nation from the ramparts of the Red Fort.

Modi, who devoted biggest chunk of his nearly an hour long speech to black money, said that out of the money deposited in banks post note ban, over Rs 1.75 lakh crore is under scrutiny. "More than Rs 2 lakh crore black money has reached banks and now people depositing such money are being made to answer questions."

The demonetisation move, he said, has checked generation of new black money. "We will continue our fight against black money and corruption. And slowly by using technology and connecting (biometric identification) Aadhaar (with several items including bank accounts and income tax return filing) we have made successful efforts," he added.

The government has in a short span of time confiscated more than Rs 800 crore of benami properties or assets owned in fictitious and proxy names, he said. Those who have looted the nation, and the poor, are not able to sleep peacefully, and honesty is being celebrated today, he said, asserting that "the fight against black money will continue".

"The result of this has been that this year, the new tax payers (filing returns) has more than doubled to 56 lakh. Last year this was 22 lakh. This is the result of fight against black money," he said.

Modi, who rode to power in 2014 on promise to eliminate black money, said the crackdown on ill-gotten wealth will continue. "More than 18 lakh people have been identified whose income is more than their declared wealth," he said. "And they have to answer questions on how they accumulated such wealth."

Of the 18 lakh, 4.5 lakh people have come out in open and are seeking to amend their "mistakes", he said, adding that one lakh of them had not paid income tax ever in the past. Stating that technology will help bring about transparency, he encouraged people to further promote digital transactions.

Recalling the steps taken by his government to unearth unaccounted and untaxed wealth, he said black money of over Rs 1.25 lakh crore has been detected in last three years which people were compelled to surrender.
Demonetisation, he said, was a step in that direction which achieved great success.

The move forced "the black money which was hidden to be brought to mainstream. Our effort was to get money into banks and make it a part of formal economy and we have done it successfully", he said.

Modi said that in a nation where closure of a couple of companies would lead to debates on destruction of economy, more than 1.75 lakh shell companies have been shut.

Black money holders hid their wealth behind the veils of shell companies, he said. "After data mining post demonetisation, we have found 3 lakh such companies which are only shell companies."

Shell companies are non-trading firms used as a vehicle for various financial manoeuvres to avoid paying taxes. "You will be surprised to know that there are 400 shell companies operating from same address. There was no enquiry and all of it was going on in connivance (between tax evaders and officials). And for this, I embarked on a fight against black money and corruption," he said.

Note ban, he said, got money into banks, which are now lowering interest rates.
Common man is getting money. "Bank are lending to poor at lower interest rates. This is all working to boost the country's economy," he said. Modi stressed on digital payments to move towards less cash economy saying there has been 34 per cent increase in digital payments in last one year.

Modi said the implementation of Goods and Services Tax (GST), that subsumed over a dozen central and state levies to weave India into one market, has been smooth. "GST has shown the spirit of cooperative federalism. The nation has come together to support GST and the role of technology has also helped," he said.

Removal of check posts after implementation of GST has cut time for transporting goods by 30 per cent, he said. The Prime Minister said for his government, good governance is about speed and simplification of processes.

"Our fight against corruption and black money will continue. We are working to bring transparency using technology," he said. "We are fighting corruption - for the bright future of India and the wellbeing of our people."

People responsible for "loot" of national wealth will have to give answers, he said. "Our fight against corruption and black money will continue."
Modi appreciated the efforts of farmers and agriculture scientists for record crop production this year.

He said the government procured 16 lakh tonnes of pulses this year, far in excess of the previous years. He said the changing nature of technology is resulting in the requirement of different skill-sets for employment and the youth is being nurtured to become job-creators, and not job-seekers.

"We are taking the nation on a new track (of development) and are moving ahead with speed," he said, adding that the government was devoting significant attention to eastern states of Bihar, Assam, West Bengal, Odisha and North East.

"These parts have to grow further," he said. Stating that the government has taken India on new tracks of development, without slackening pace, Modi said he wants to create an India where poor have a concrete houses, electricity and water. "An India where farmer does not have any worry and sleeps peacefully. An India where farmer gets double of what he sows."