Demand for post office accounts in Karnataka goes up

Post Office Savings Bank Account is much easier to open that requires a paltry amount of Rs 50. 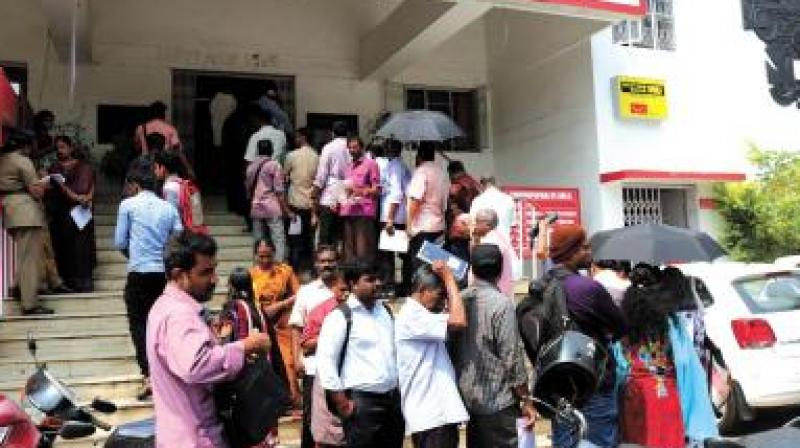 India Posts has a vast network of post offices.

Mumbai: For banking customers, post office savings bank accounts could offer some relief as public and private sector banks have increased transaction charges both at ATMs and bank counters.

Opening a Post Office Savings Bank Account is much easier that requires a prospective customer to spend a paltry Rs 50 and sets a minimum balance requirement at Rs 500 per month, according to a report in The New Indian Express.

The report adds that post offices in Karnataka have distributed as many as 1 lakh India Post ATM cards in the backdrop of banks hiking their cash withdrawal fees and also increasing amount of minimum balance required to keep an account active.

The post office account comes with an India Posts ATM card with extra charges for customers. At present, the department has 76 ATM counters across the state of which 14 are in capital city Bengaluru alone, the report said.

These accounts guarantee unlimited transactions at India Posts branches, a chequebook that comes for a deposit price of Rs 500 and a daily cash withdrawal limit of Rs 25,000.

In contrast to this, both public and private sector banks have started levying transaction and cash withdrawal charges through ATMs. Apart from this, some banks have increased their minimum balance maintenance limit for savings bank accounts.

“We are getting an overwhelming response for POSB especially after banks, including SBI, recently hiked transaction fees and other charges. We have distributed more than 50,000 ATM cards in the state over the last five months. Our account holders can also withdraw money from any bank ATMs,” The New Indian Express quoted a senior official of India Post (Karnataka Circle) as saying.

Besides all these facilities, India Posts is also working on plans to introduce mobile banking and internet banking facilities at its all branches across the country. The department has 32,292 post office branches that have already adopted core banking solution system. Apart from that as many as 970 India Posts ATMs are operational in country, the report said.