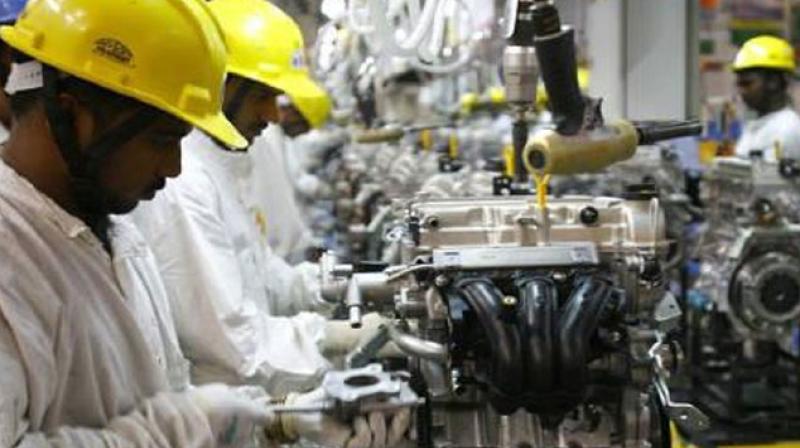 Industrial output grew by 4.4 per cent in March, the slowest in five months. (Photo: PTI)

New Delhi: Industrial output grew by 4.4 per cent in March, the slowest in five months, due to a fall in capital goods production and deceleration in mining activity, according to the official data.

Industrial growth measured by the Index of Industrial Production (IIP) in 2017-18 too decelerated to 4.3 per cent from 4.6 per cent in the previous fiscal. The IIP grew by 4.4 per cent in March 2017, the same as in March this year, the data released by the Central Statistics Office (CSO) showed on Friday. The previous low at 1.8 per cent was recorded in October 2017.

Manufacturing sector, which constitutes over 77 per cent of the index, grew at 4.4 per cent in March as compared to 3.3 per cent in the same month a year ago.

Capital goods output, however, declined by 1.8 per cent during March as compared to a growth of 9.4 per cent in the corresponding period last year. Consumer durables output on the other hand showed an increase of 2.9 per cent as against decline of 0.6 per cent in March 2017.

The consumer non-durables segment showed an impressive growth of 10.9 per cent in March as against 7.5 per cent in corresponding month last year.