Retail inflation contained at 6.2% despite biggest contraction in economy: Sitharaman 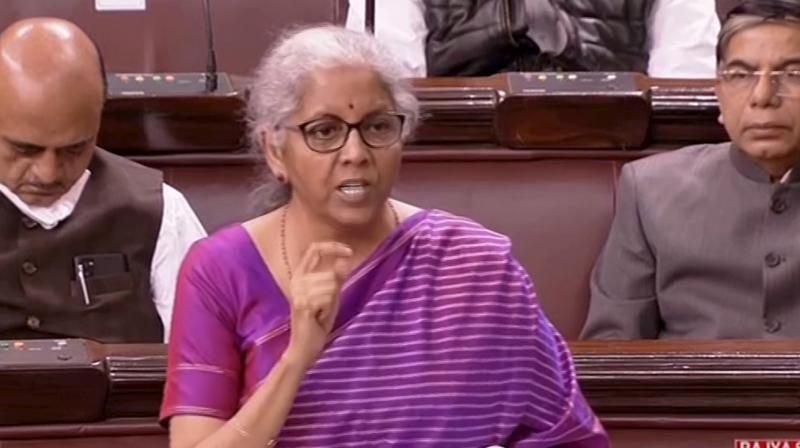 New Delhi: Finance Minister Nirmala Sitharaman on Friday said the retail inflation was contained at just 6.2 per cent despite the Indian economy suffering the biggest contraction of Rs 9.57 lakh crore.

Replying to a general discussion on the Union Budget in Rajya Sabha, the minister said the Budget for 2022-23 stands for continuity, brings stability to the economy and predictability of taxation.

She stated that the objective of the Budget is a stable and sustainable recovery in the economy.

The minister said the Indian economy suffered the biggest contraction because of the pandemic.

She explained that the Indian economy suffered Rs 9.57 lakh crore loss due to the pandemic, compared to a Rs 2.12 lakh crore contraction during the global meltdown in 2008-09.

Sitharaman said the government is also encouraging startups and that resulted in the creation of many unicorns during the pandemic.

She also said that there is no cause to worry because of different numbers of GDP in the Economic Survey and Budget documents, as it was a result of sources of data being different.

About public spending, the minister said Rs 7.5 lakh crore spending will create jobs and employment creation is not limited to 60 lakh jobs from productivity linked incentive plan for 14 sectors.

The MNREGA (Mahatma Gandhi National Rural Employment Guarantee Act) was infested with ghost accounts and people not born were receiving money, she pointed out.

The MNREGA is a demand-driven programme meant to provide jobs to rural unemployed in the lean season, and whenever demand comes, it is funded, the minister noted.

She said Rs 73,000 crore is provided for rural employment guarantee scheme MNREGA and will give more if demand comes.

Fertiliser subsidy rose from the budgeted Rs 79,530 crore for FY22 to Rs 1.4 lakh crore in the revised estimates and shows the government is receptive to the needs, she added.

Replying to the opposition charge that small businesses were shuttered, she stated that 67 per cent of MSMEs were temporarily shut due to the lockdown.

India has witnessed breaching the 6 per cent tolerance limit for inflation on 6 occasions since 2014 (when the NDA government came into power at the Centre) as inflation management is robust, she told the House.

The economy was Rs 1.1 lakh crore 7 years ago, and now it is Rs 2.32 lakh crore, she stated on the charge of the economy running on a treadmill.

Sitharaman said there is no question of slowdown or recession, citing estimated 9.2 per cent GDP growth in the current fiscal.

About the cryptocurrencies, she noted that the decision about banning or not banning will come subsequently after consultations.

She also stated that "(whether it is) legitimate or illegitimate, it is a different question, but I will tax because it is a sovereign right to tax".