G20 finance chiefs to warn of trade risks, differ on how 'pressing'

Global growth appears to be stabilizing and is projected to pick up moderately later this year and into 2020, said G20 communique. 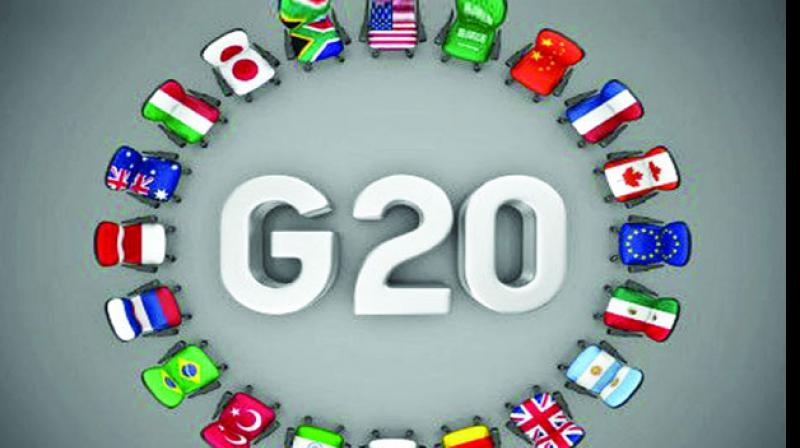 G20 leaders had agreed last December to review the WTO reform in Osaka later this month.

Fukuoka: Global trade tensions threaten an expected pick-up in economic growth this year and in 2020, a draft communique by the world’s financial leaders showed on Saturday, but the policymakers were divided on whether the need to resolve them was “pressing”.

Finance ministers and central bank governors of the world’s 20 biggest economies, the G20, are meeting in the southern Japanese city of Fukuoka to discuss the global economy amid rising trade tensions between China and the United States.

“Global growth appears to be stabilizing and is generally projected to pick up moderately later this year and into 2020,” the draft G20 communique, seen by Reuters, said.

“However ... risks remain tilted to the downside. These include, in particular, intensified trade and geo-political tensions,” said the draft communique, which may yet change before it is released on Sunday.

The draft statement, to which all the G20 financial leaders have to agree, contains a sentence in square brackets — which means it was not yet agreed — that trade and investment were important engines of growth.

“We reaffirm our leaders’ conclusions on trade from the Buenos Aires Summit and recognize the pressing need to resolve trade tensions,” the sentence still under discussion said.

If the sentence is dropped from the final statement, it would mean rowing back on an agreement reached by G20 leaders last year in Argentina that while the existing international trade system — the World Trade Orgnisation — needs improvement, it helps world growth and should be fixed.

G20 leaders also agreed last December to review the WTO reform in Osaka later this month. But progress in overhauling the WTO, which still functions under rules created a quarter of a century ago, has been slow, partly because of U.S. actions to block appellate judge appointments.

A Japanese finance ministry official who attended Saturday’s G20 session told reporters that most of the group’s members voiced concern that escalating trade tensions posed a huge downside risk for the global economy.

“With so many countries expressing concern over the fallout (from the trade tensions), there seems to be some momentum to reflect that in the communique. But there’s no conclusion yet” on the language of trade, the official told reporters.

Relations between the United States and China have deteriorated since U.S. President Donald Trump in early May accused Beijing of reneging on commitments to change its ways of doing business with the rest of the world. Washington raised tariffs on Chinese goods and threatened new levies, while Beijing has retaliated.

U.S. Treasury Secretary Steven Mnuchin, who will hold talks with China’s Yi Gang on the sidelines of the G20 gathering, said the United States wants free, fair and balanced trade with China, in part to close a gaping U.S. trade deficit with China.

But the United States is prepared to levy tariffs on virtually all remaining Chinese imports if the “right deal” cannot be reached to satisfy U.S. demands for better Chinese protections of intellectual property and curbs to technology transfers and state subsidies, Mnuchin said.

“If we can’t have that, the end result will be that my expectation is that many companies will move their production out of China to other locations,” due to tariffs, Mnuchin said.

He said his scheduled meeting with People’s Bank of China Governor Yi Gang will not be a “negotiating meeting” on trade issues, reinforcing the view there will be little breakthrough in the row between the world’s two largest economies.

He added that any major progress will rest with Trump’s expected meeting with Chinese President Xi Jinping at a G20 leaders’ summit late this month.

In a rare positive development, the U.S. administration said it will put off imposing tariffs against Mexico after the two countries reached a deal to contain the migration of immigrants crossing the southern U.S. border.

“It’s a very good outcome not just for the United States and Mexico, but for the global economy,” Bank of Japan Governor Haruhiko Kuroda told reporters.