The target was set at the recent second edition of the two-day annual meet of tax officers, which was addressed by Modi. 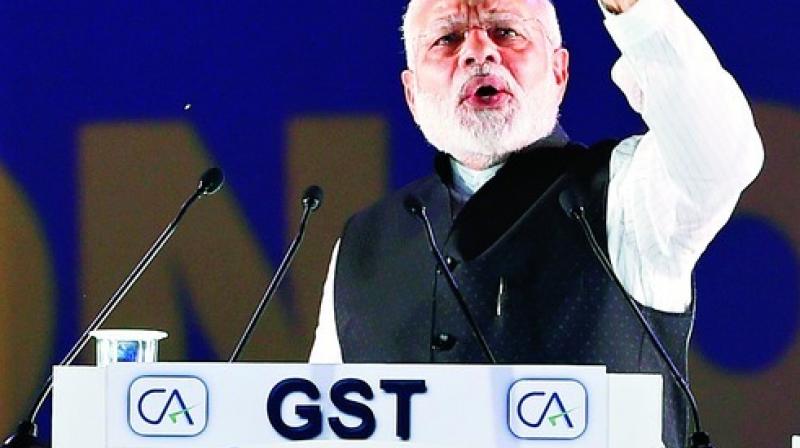 The government has tasked taxmen with bringing half the 6 crore private businesses in India in the GST net. Photo: PTI

New Delhi: The government has tasked taxmen with bringing half the 6 crore private businesses in India in the GST net, up from less than a crore at present, and also make the IT system glitch free, an official source has said.

The target was set at the recent second edition of the two-day annual meet of tax officers, which was addressed by Prime Minister Narendra Modi, he said.

A key to achieving the target is putting in place a permanent mechanism of almost real-time data exchange between the departments that handle direct tax - income and corporate - and the one which handles indirect levies like customs and Goods and Services Tax (GST).

"As part of tax base widening, the Prime Minister has asked us to bring 3 crore businesses within the GST net. We are presently at near one crore and 3 crore target is possible," a source told PTI.

Besides, 20 lakh new registrations have happened taking the total tally of GST registrations to over 92 lakh. This is against 6 crore businesses, including informal ones, in the country.

"The thrust of Gyan Sangam was more integration between CBDT and CBEC. If data exchange is made a reality, then we can reach out to more number of people based on their Income Tax return filing data," the source said.

He said however that the priority of the department is to settle down the GST regime and then implement the data exchange idea. "The data exchange is still some time away, it can happen from next fiscal. Once that happens both the CBEC and CBDT can analyse whether the corporate income tax profile matches the turnover shown in GST returns," the source said.

The focus of PM's speech in the two day Rajaswa Gyan Sangam was more towards GST and how to provide a glitch free regime so that the benefits of GST reach the masses, he added.

Meanwhile, the Prime Minister's Office (PMO) on Wednesday reviewed the GST Network systems as it braces itself for handling 3 billion invoices in the final returns to be filed by September 10.

The government had earlier this week extended the deadline for filing the final GST returns for July.

GSTR-3 which is the match of GSTR-1 and GSTR-2 will have to be filed by September 30, in place of September 15.