Business   Economy  07 Feb 2019  It's govt right to demand interim dividend and use it the way its wants: Das
Business, Economy

It's govt right to demand interim dividend and use it the way its wants: Das

Payment of surplus or interim dividend to the government is a part of the RBI Act, says RBI Governor. 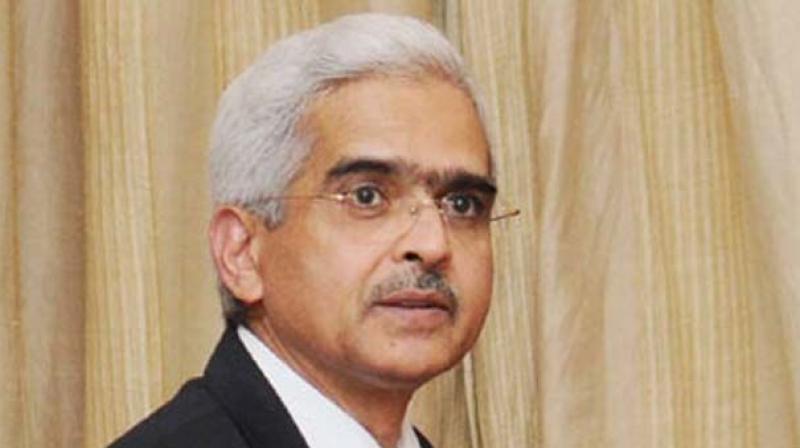 Mumbai: Reserve Bank Governor Shaktikanta Das on Thursday said it is the right of the government to ask for an interim dividend from it and use it the way it wants.

This was the maiden monetary policy review announced under his chiarmanship.

Das, who retired as the finance secretary last May and was appointed, also parried other questions about the credibility of the budgetary numbers as well as the impact of the other many give-aways in the budget on fiscal slippages.

Be it the impact of the Rs 6,000 cash transfer to 120 million poor farmer households that too retrospectively from December 2018--leading to an over Rs 20,000 crore outgo this fiscal this year; or the massive tax-breaks to the middle- class, shaving off another Rs 22,000 crore-plus of tax revenue, or the questions about the "hygiene" of the fiscal deficit as the interim budget document which should have been just a vote-on-account contains lots of off-budget measures.

The poll-bound BJP government's move to offer cash to 120 million farmer families was criticized by many as a way to buy peace with the farmers who are severe financial distress the money for which would be met by an interim dividend of Rs 28,000 crore from the RBI.

"Payment of surplus or interim dividend to the government is a part of the RBI Act, so we are not doing anything beyond what is there in the legal provision," was all that Das would proffer.

It can also be noted that some concerns have been raised about the practice of government asking RBI for an interim payout before the close of a fiscal year to bridge its fiscal gap for the second consecutive year. A wider fiscal deficit is generally seen as a concern for RBI because of its inflationary impact.

"How the government uses the proceeds of RBI dividend is government's decision," the former carrier bureaucrat said.

In comments that came days after economic affairs secretary SC Garg even quantified what it wanted from the RBI-- Rs 28,000 crore as interim dividend, Das said central board will be discussing the demand at its next meeting scheduled for February 18.

To a question on the impact of the budget proposals on inflation, Das said the same has been factored in its projections as more disposable income with the public, especially with the farmers, are being termed as inflationary by experts.

Without offering any specific views on the budgetary measures, Das said the possibility of fiscal slippage has also been internalised by the RBI while pencilling in its inflation projections.

He said the off-budget items are for the fiscal administrators to take care of, while on the public sector borrowing requirement, Das said a public debate has started just now on this.

Das also ducked a question on farm distress, saying it requires a wider discussion and called for focusing on the policy measures announced earlier, where the RBI cut its key rates by 0.25 per cent.

It can be noted that RBI had been for long very particular about speaking out against government moves which may lead to fiscal expansion or a dent to credit culture as with moves like farm loan waivers.

Even in the policy resolution with a 4:2 vote for rate cut, the MPC limited itself to saying the budget proposals will increase the disposable incomes but will take time to take root.

Speaking to reporters, Das said the estimates on expenditure and revenue have also been taken into account as RBI feels the GST collections will go up from here.

"We expect GST collections will pick up because the initial bottlenecks and various changes in the systems have been almost streamlined. GST collections are also likely to show better growth," he said.

On removing three state-run banks from the prompt corrective action framework, Das said the action was taken following improvements in their performance and also the capital infusion into them.

For the remaining eight banks, he said RBI decision will be data-dependent and improvements their balance-sheets will report.

However, he also categorically denied any move to relook at the contentious February 12, 2018 circular on new NPA recognition norms which may discomfort the North Block mandarins.