The RBI on August 25 rolled out Rs 200 notes to address the crisis of low value currencies. 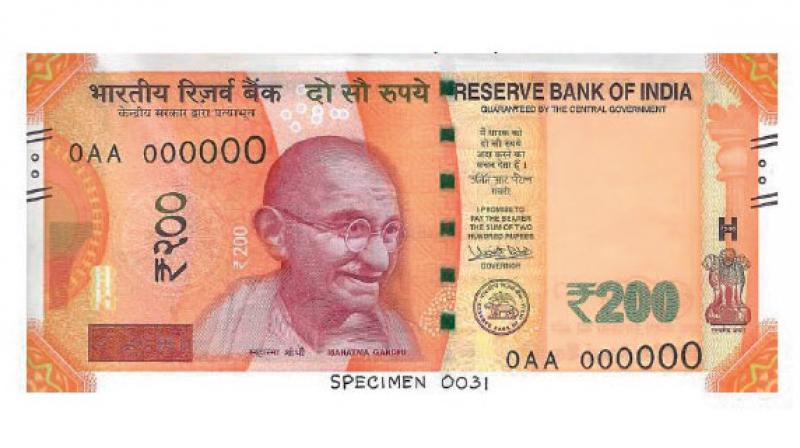 This is how the new Rs 200 note looks. Photo:Twitter| @ANI

Mumbai: Although the Reserve Bank of India rolled out the new Rs 200 note a week ago, chances are that you will not get the same at ATMs before another two to three months due to the requirement of recalibration.

According to a report in IANS, ATM manufacturing companies have not yet received any notification form the central bank regarding the recalibration of ATMs for dispensing the new note.

However, they said that some banks have informally asked them to begin testing the new note for recalibration of machines since it is of a new size.

With an aim to address the gap between low and high denomination currencies, the Reserve Bank of India on August 25 rolled out Rs 200 notes. This was seen as a move towards infusing low value currency in the banking system after the note-ban decision of November 8, 2016 when Prime Minister Narendra Modi scrapped Rs 500 and Rs 1000 notes overnight.

In fact, it was only last year, after the announcement of demonetisation, that about 2.25 lakh ATMS in India were recalibrated for dispensing the new note.

Ravi B Goyal, Chairman and Managing Director, AGS Transact Technologies Limited, which claims to have an installed base of 60,000 ATMs, told IANS, "The process of recalibration will begin once we receive the directive from the RBI. The size of the new notes is different from the existing ones and so, once we receive the new notes, we will have to understand its dimensions and accordingly reconfigure the ATM cassettes. Next, we will have to check if the supply of notes is good enough to run the cassettes at full capacity."

The RBI had in another statement promised accelerating the process of issuing a greater number of Rs 200 notes, which are currently available at select RBI branches and banks. "The production of these (Rs 200) notes is being ramped up by the currency printing presses and over time, as more notes are printed, it will be distributed across the country through the banking channels and will be available for public in adequate quantity," the RBI had said in a statement.

RBI had said that Rs 200 note will be the "missing link" between low and high value currencies. As of now ATMs in India dispense currency denominations of Rs 100, Rs 500 and Rs 2000.