Read how India is fast becoming a cashless economy

State Bank of India finding says there was no surge in cash withdrawals despite banks lifting all limits. 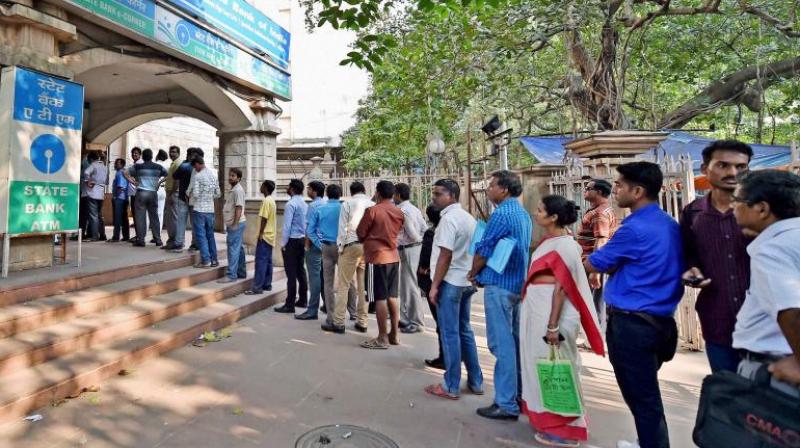 People standing in a long queue to collect cash from an ATM in Kolkata. (Photo: PTI/File)

Mumbai: Believe us or not but India is fast becoming a cashless economy as number of people opting for digital transactions is rising manifold with each passing day. This should not come as a surprise especially in the backdrop of demonetisation.

Under the 'sudden' notes recall decision of Prime Minister Narendra Modi, over 86 per cent of total currency in circulation were scrapped on a few hours notice and new legal tenders were introduced afterwards.

The research cites an RBI data to say that cash withdrawals have come down drastically after 50 days note ban period, from November 10 to December 30 last year.

"From the peak of Rs 528 billion in January 13 weekend it has come down to Rs 325 million in weekend ending March 24," the report said.

The government and the RBI had brought in limits on cash withdrawals in November last year after 86 per cent currency in circulation of old Rs 1,000 and Rs 500 denominations were scrapped overnight.

In March this year, the central bank lifted all the restrictions on cash withdrawals as, according to the government, new legal tender worth over Rs 10 lakh crore had been remonetised back into banking system by January 2017.

The cash supply in the banking system has also improved since the RBI in tandem with the government stated the remonetisation exercise that aims to do away with severe cash crunch.

According to government data, new currency notes of Rs 2,000 and Rs 500 worth Rs 12 lakh crore have already been remonetised back into the banking system.

A bank official told Livemint that there has been a sharp fall in currency production. Not enough quantity of cash supply could also be the reason for drop in cash withdrawals. Apart from that people banks are still not ensuring ample supply of lower denomination currency notes.

On November 8 last year, old legal tenders worth Rs 15 lakh crore were recalled, a decision that has widely been promulgated as an anti-black money and anti-counterfeiting measure.