RBI has made a priority of maintaining consumer inflation at around 4 per cent with a band of -/+2 per cent. 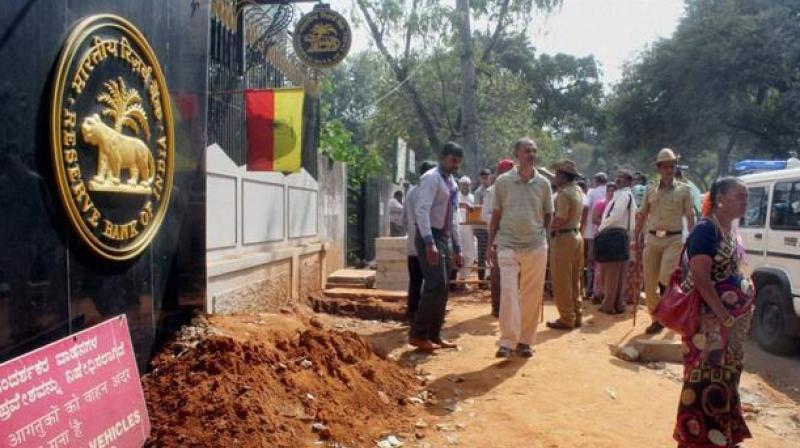 Reserve Bank of India, RBI, is meeting on October 3-4 for its bimonthly policy review. (Photo: PTI)

Mumbai: The Reserve Bank of India (RBI) is expected its policy rate unchanged at a policy meeting this week despite a sharp slowdown in economic growth, after inflation surged to a five-month high, threatening the central bank’s target.

The RBI has made a priority of maintaining consumer inflation at around 4 per cent -- the midpoint of its mandated target of 2 to 6 percent -- having switched to a “neutral” policy stance from “accommodative” earlier this year.

It is thus expected to react with concern after a surge in food prices boosted retail prices up 3.36 percent in August from a year earlier.

Analysts expect inflation could continue to quicken, given food prices tend to rise during the winter.

Worryingly, core inflation - which excludes energy and food - has remained even higher, reaching 4.6 percent in August amid stubbornly high prices in key areas such as health and education.

The inflationary trend could rule out any chance that the RBI will cut the repo again, after lowering it by 25 basis points to a seven-year low of 6 percent at its last meeting in August, even as economic growth unexpectedly slowed to a three-year low of 5.7 percent.

The RBI also will likely be concerned by growing expectations that the government will ramp up spending to boost growth, potentially leading to a loosening of its current fiscal deficit of 3.2 percent of gross domestic product for the year ending in March.

All but 3 of 60 analysts surveyed by Reuters expected the RBI’s monetary policy committee (MPC) to keep the repo rate unchanged, and a majority of analysts forecast no changes until at least early 2019.

“We expect the MPC to keep rates on hold and retain the neutral (policy) stance,” said A. Prasanna, an economist for ICICI Securities Primary Dealership in Mumbai.

Other signs point to potentially higher inflation, just as the RBI had projected in August, when the MPC said it expected consumer prices to advance 3.5 to 4.5 percent in October-March.

Crude prices have rallied, sending Brent crude to its highest in more than two years, a worry given India imports most of its energy needs.

The RBI will also be deterred from easing given lingering uncertainty as the U.S. Federal Reserve gears up to start unwinding some of its massive monetary stimulus later this year and continues to gradually raise U.S. interest rates.

India already saw net outflows of $1.11 billion in equities last month, adding to their $2 billion in sales in August. That helped send the rupee down more than 2 percent, its biggest monthly fall since November.

A weaker rupee would raise concerns about market stability and further raise the prospect of a rise in imported inflation.

Nonetheless, holding off on cutting rates will likely mean the RBI will need to fend off pressure from the government and corporate executives to provide more monetary stimulus to the economy.

The RBI in August had projected gross value added growth of 7.3 percent for 2017-18 - a measure of economic growth it prefers - calling “risks evenly balanced,” and it is widely expected to have to cut those forecasts.

“Growth is certainly one of the variables the RBI looks at, but right now inflation dynamics are going to be the priority and they will continue to make the case that the solution to lift growth lies elsewhere,” Radhika Rao, an economist for DBS Bank in Singapore said.