Niti cites slump in manufacturing as reason for dip. 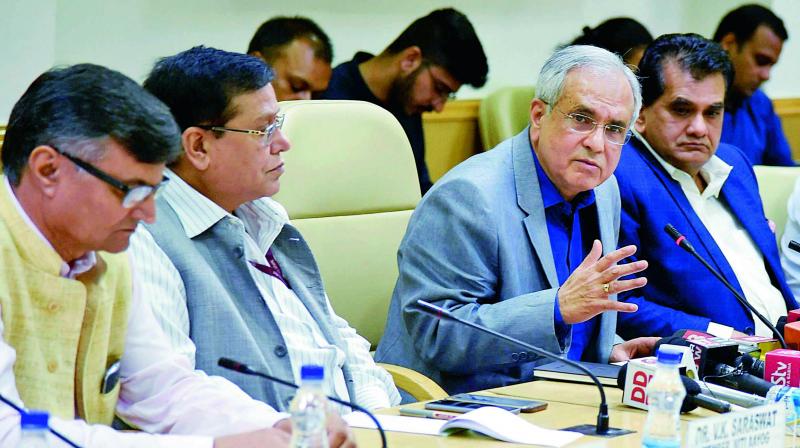 New Delhi: Despite the nation’s economic growth sliding to a three-year low of 5.7 per cent in the first quarter of the current fiscal owing to a slump in manufacturing, Niti Aayog’s newly appointed vice-chairman Rajiv Kumar on Friday expected it to rise to the level of 7 to 7.5 per cent in the second quarter due to good monsoon and positive impact of GST.

“I am confident that in the July-September quarter, economy will grow by 7-7.5 per cent. Destocking, which was in anticipation of GST rollout, has completed and now, there is more clarity on the new tax regime,” said Mr Kumar, who took charge as vice-chairman on Friday replacing Arvind Panagariya.

He noted that monsoon has been good and several IPOs are in the offing, and also with FDI and FIIs increasing, all these aspects will lead to a high GDP growth in the July-September quarter of 2017-18.

The Congress, meanwhile, dubbed the Centre as “useless” for having “no vision” for the economy in the backdrop of falling GDP numbers, and sought a white paper on the state of affairs. The Opposition party also demanded the release of the GDP figures for last 10 years based on both old and new methodologies. Senior Congress leader Anand Sharma said, “The GDP growth, which is falling for the last six quarters, is around 4.3 per cent as per old methodology.”

“The GDP continues to be in constant decline. The sharp dip seen now is not just 5.7 per cent, it (GDP) will be 4.3 per cent based on old methodology,” he told reporters. Mr Kumar, while interacting with mediapersons after taking charge, vehemently refused to believe the theory that the GDP growth in the first quarter was impacted by the demonetisation exercise. Rather he said that the slide was due to massive destocking which was undertaken by manufacturers in anticipation of GST rollout from July 1.