Mr Goyal said that historically the three month from April to June are lean periods of tax collection. 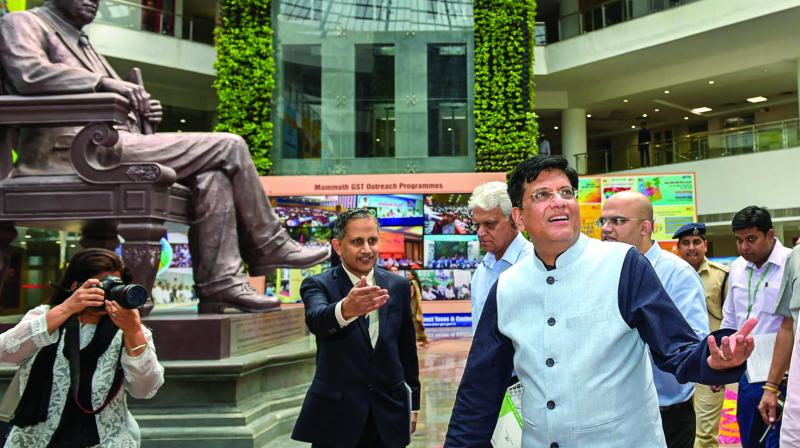 Finance minister Piyush Goyal and chairman of Central Board of Indirect Taxes and Customs S. Ramesh arrive at the “GST Day celebration” on completing one year at Ambedkar International Centre in New Delhi. (Photo: PTI)

New Delhi: With the Goods and Services Tax (GST) stabilising,  Union finance minister Piyush Goyal on Sunday said that collections from the new indirect tax is expected to exceed Rs 13 lakh crore in FY19 and with increased revenues there will be further scope to rationalise the tax rates.

“I assure you that average monthly GST collection will cross Rs 1.10 lakh crore ... I feel more than Rs 13 lakh crore revenue will come from GST this fiscal,” said Mr Goyal.

The Centre on Sunday celebrated the first anniversary of GST roll out on July 1, 2017,  as “GST Day”.

Mr Goyal said that historically the three month from April to June are lean periods of tax collection. In the earlier indirect tax regime 7.1 per cent of taxes used to get collected in the three months. “So, 94,000 crore collection is music to my ears,” he said.

“The more people get into the honest and transparent system and with the success of e-way bill system, we will be in a better position to rationalise tax slabs. The different rate slabs were kept after considering the social structure of the nation.... Is it proper to tax luxury cars and items of common items used by poor people?” Mr Goyal said.

He said that Dr Ambedkar stitched the nation through the Constitution, Sardar Patel bonded the fragmented nation geographically, now GST has transformed the country into an economic union as ‘One Nation, One Tax, One Market’.

The minister also asked finance secretary Hasmukh Adhia to look into the option of allowing composition scheme dealers to file returns yearly, instead of quarterly at present.

Union minister Arun Jaitley who addressed the gathering through a  video link said that the roll out of GST has not been disruptive in the last one year.

“The smooth manner in which the changeover has taken place is almost unprecedented  anywhere in the world,” he said.