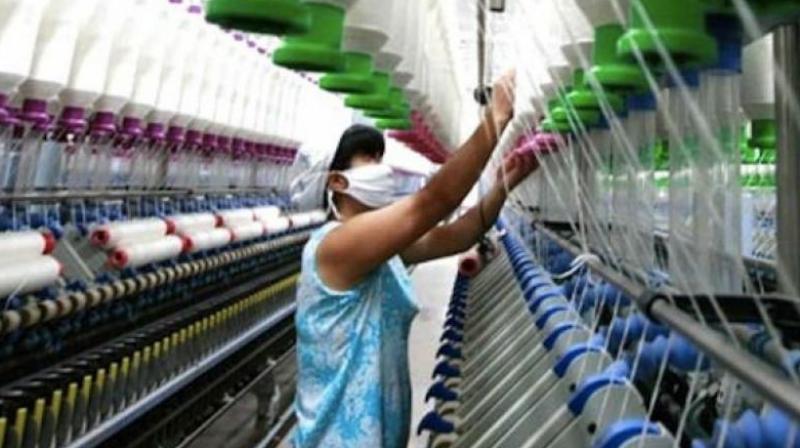 The official non-manufacturing Purchasing Managers' Index (PMI) stood at 54.5 in December, down from 54.7 in November, but well above the 50-point mark. (Representational Image)

China's manufacturing sector expanded for a fifth month in December, but growth slowed a touch more than expected in a sign that government measures to rein in soaring asset prices are starting to have a knock-on effect on the broader economy.

The official Purchasing Managers' Index (PMI) stood at 51.4 in December compared with 51.7 in November.

A reading above 50 indicates an expansion on a monthly basis while one below 50 suggests a contraction.

December's reading was slightly below the forecast in a Reuters poll for 51.5.

A housing boom in the second half of 2016 and a government spending spree on infrastructure have helped boost prices for commodities from cement to steel, giving the manufacturing sector a much-needed lift.

But the government is cracking down on speculative property buying, and signals from policymakers that more will be done to contain asset bubbles and rising debt - even at the expense of slower growth - means extra stimulus measures could be limited.

"Today's PMI figures suggest that the change of policy tone has taken its toll, as the authorities are seriously concerned about the asset bubbles," said Zhou Hao, senior economist at Commerzbank.

Factory output slowed in December, with the sub-index hitting 53.3 compared with 53.9 the previous month.

Jobs were again lost, with the employment sub-index sitting at 48.9, compared to 49.2 in November, as the country pledged to cut excess capacity over a range of industries.

A sub-index for smaller firms fell, and performance for larger companies also worsened.

The Markit/Caixin PMI, a private gauge of manufacturing activity which focuses more on small- and mid-sized firms, is due on January 3.

Analysts in a Reuters poll expect it to fall to 50.7 from the previous month's reading of 50.9.

A separate reading on the services sector showed the pace of growth slowed in December, Sunday's data showed.

The official non-manufacturing Purchasing Managers' Index (PMI) stood at 54.5 in December, down from 54.7 in November, but well above the 50-point mark.

China is counting on growth in services - which account for more than half of gross domestic product - to offset persistent softness in exports that is dragging on the economy. Private investment has also remained stubbornly weak.

But GDP still looks set to hit Beijing's 2016 growth target of 6.5 to 7 per cent, after expanding 6.7 per cent for each of the first three quarters.