The digital revolution will play a big role in delivering services to the people in India in the coming days, says FM. 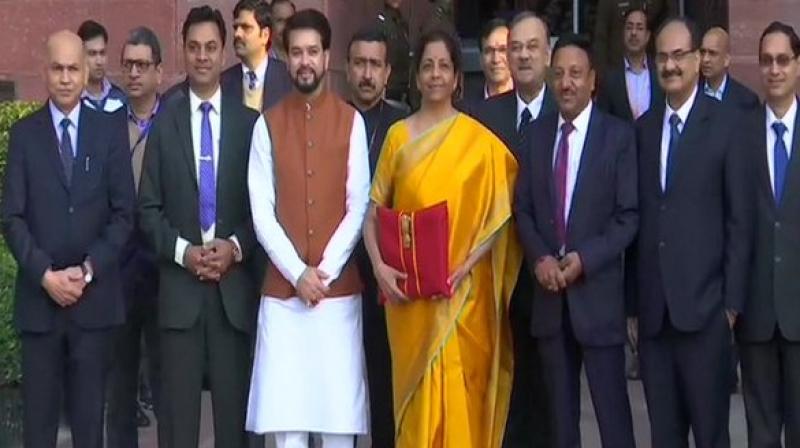 New Delhi: Aspirational India, economic development and a caring society for all are the three prominent themes of the Union Budget 2020-21, said Finance Minister Nirmala Sitharaman on Saturday.

"This budget is woven around three prominent themes, aspirational India, in which all sections of society seek better standards of living, economic development for all, indicated in Prime Minister's exhortation 'Sabka Saath, Sabka Vikaas', and lastly, ours shall be a caring society," Sitharaman said during the presentation of the Budget.

She further said that the digital revolution will play a big role in delivering services to the people in India in the coming days.

"The digital revolution, which has placed India in a unique leadership position, globally will see the next wave. We shall aim to achieve seamless delivery of services through digital governance," Sitharaman said.

Earlier the Union Cabinet, chaired by Prime Minister Narendra Modi, approved the Budget ahead of its presentation in the Parliament.

The Cabinet meeting was held after Sitharaman, who carried a 'Bahi-Khata', met President Ram Nath Kovind, accompanied by MoS Finance Anurag Thakur and other officials from her ministry.

To ease allotment of PAN, new process of instantly allotting PAN through Aadhaar will be brought, says Finance Minister

Tax on cooperative societies proposed to be reduced to 22 per cent plus surcharge and cess, as against 30 per cent at present.

She however, said the government expected tax buoyancy to take time and the recent cut in corporate tax to cause loss of substantial revenue in short run, economy to reap huge returns in due course.

Plan to hike FPI limit in corporate bonds to 15 per ent from 9 per cent: FM Nirmala Sitharaman

The government plans to increase investment limit of foreign portfolio investors (FPI) in corporate bonds from 9 per cent to 15 per cent, Finance Minister Nirmala Sitharaman said on Saturday.

In her second Budget presentation, the finance minister said certain government securities will be open for foreign investors.

To address liquidity constraints of NBFCs and housing finance corporations, partial credit guarantee scheme will be launched by the government, she added

Corporate tax cut will be available for power generation companies as well. Government will grant exemptions for sovereign wealth funds in infrastructure and other notified sector with minimum lock-in of three years. The rate of withholding tax has been extended to 2023 for FPIs.

A new simplified income tax regime for individual tax payers. For income between Rs 7.5-10 lakh, the tax rate has been reduced to 15 per cent from 20 per cent income tax slashed to 10 per cent for those earning between 5 lakh to 7.5 lakh and Income above Rs 15 lakh will continued to be taxed at 30 per cent, says FM.

To further incentivise affordable housing, a tax holiday is provided for developers of such projects. The date of approval for such projects extended by one year.

Government proposes to sell a part of its holding in LIC by initial public offer.

Deposit Insurance and Credit Guarantee Corporation has been permitted to increase deposit insurance coverage to Rs 5 lakh per depositor from Rs 1 lakh.

Mechanism will be made to address liquidity constraints of NBFCs and Hosue finance corporations. Govt to offer support by guaranteeing securities floated to provide liquidity for NBFCs

Govt proposes to encourage and incentivise states that are formulating plans for ensuring cleaner air. In large cities with population of over 1 million, clean air is a matter of concern, says FM

In her speech she said that our government will enhance allocation of Rs 9500 crores for senior citizens and 'Divyang'.

100,000 gram panchayats will be connected to the optical fibre programmes.she added.

Large solar power capacity to be set up alongside rail tracks, on land owned by Railways

Entrepreneurship is the strength of India. I propose to set up an investment clearance cell that will provide end to end facilitation and support including pre-investment advisory, info on land banks and facilitate clearance at state level, says FM Sitharaman.

She said, viability gap funding window to be set up to cover hospitals, with priority given to aspirational districts that don't have hospitals empanelled under Ayushman Bharat scheme.

Govt e-market place working on single platform for exchange of goods. MSMEs to benefit, She added

FM proposes setting up of 100 new airports by 2024. and also said that the Air traffic has grown exponentially when compared to world average.

Degree-level online education programmes to be launched by select institutes, and it will generate huge employment opportunity awaits Indian youth in construction, infrastructure and maintenance of infrastructure, says Nirmala Sitharaman.

NABARD refinance scheme will be expanded. Proceeds from taxes on medical devices would be used to support setting up of hospitals. Govt proposes to expand coverage of artificial insemination to 70 pc from 30 pc to increase livestock productivity.
One horticulture crop in one district on cluster basis will be promoted.

FM Rs 69,000 crore to the health sector in Union Budget 2020. she also announces the launch of 'TB harega, desh jeetega' with the aim to eradicate Tuberculosis by 2025

While speeking on GDP she said, India is now the fifth largest economy in the world and the Central government has reduced  debt to 48.7 per cent of GDP from 52.2 per cent in March 2014. Growth of 7.4 per cent was surpassed in 2014-19 with average inflation of 4.5 per cent.

India has uplifted 271 million people out of poverty. The government aims to achieve seamless delivery of services through digital governance. We shall strive to bring ease of living for every citizen, says FM

Finance minister also stated that the fish production have rise to 200 lakh tonnes in 2022-23.Growing of sea weed and cage cultur will also be included,

FM  also said that  we have  to build a seamless national cold supply chain for perishables, Indian Railways and we  will set up Kisan Rail through PPP model so that perishable goods can be transported quickly. she  also said that Krishi Udaan will be launched by MoCA on international and national routes.

Finance Minister Nirmala Sitharaman also said that  there are three key points of Budget-aspirational India, economic development for all and that ours shall be a caring society.

Our government is committed to doubling farmers income by 2022. We have provided for 110 million farmers through PM Kisan Beema Yojana. Provision of annual assistance to the farmer is made sure through PM Kisan yojana. Agricultural markets needs to be opened and liberalised. Fisheries, animal husbandry and dairy needs to be provided for,  says Finance Minister Nirmala Sitharaman.

Finance Minister Nirmala Sitharaman said that between 2006-2016 India was able to raise 217 million people out of poverty.

FM Nirmala Sitharaman says, GST has resulted in efficiency gains in the transport and logistics sector, inspector raj has vanished, it has benefitted Micro, Small & Medium Enterprises(MSME). Consumers have got an annual benefit of 1 lakh crore rupees by GST.

Simplified return for GST is being introduced from April 2020, says FM in Budget speech.

FM Nirmala Sitharaman also pay homage to visionary leader Late Arun Jaitley, the chief architect of Goods and Services Tax. GST has been the most historic of the structural reforms. GST has been gradually maturing into a tax that has integrated the country economically.

FM Nirmala Sitharaman's said that we have renewed vigour, under PM's leadership, we commit ourselves to present the people of India with all humility and dedication. People have reposed faith in our economic policy.

She stated that our people should be gainfully employed, our businesses should be healthy; for all minorities, women and people from SCs and STs, this Budget aims to fulfill their aspirations .