Business   Companies  27 Dec 2019  Indian apparel industry has seen it all in 2019
Business, Companies

Indian apparel industry has seen it all in 2019

Here is a look at the major developments that have happened in the Indian fashion industry in 2019. 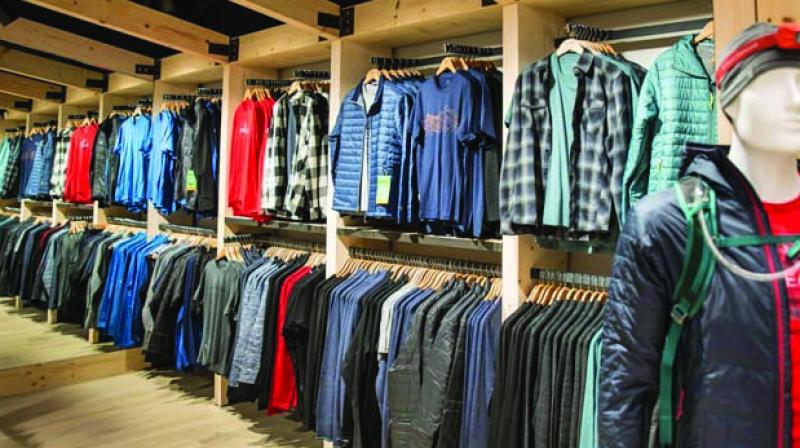 Right from the influx of overseas fashion brands to India, expansion of both domestic and overseas apparel exporters to policy reforms and emergence of startups, India has seen it all in 2019. (Photo: Representational)

Mumbai: As we prepare to enter the New Year, it’s time to reassess 2019 and the directions come out very strongly for the fashion apparel industry. Looking back, the year has witnessed a lot of positive changes in the Indian fashion industry; both retail and manufacturing. Right from the influx of overseas fashion brands to India, expansion of both domestic and overseas apparel exporters to policy reforms and emergence of startups, India has seen it all in 2019. Circular economy has become a talking issue and it proved to be not less than a revolution in this year. However, as far as trade between the countries is concerned, the apparel industry took a hit worldwide majorly contributed by US-China trade war.

Mayank Mohindra, Director, Apparel Sourcing Week, looks at the major developments that have happened in the Indian fashion industry in 2019.

Relaxed FDI helps retail brands’ expansion – 2019 saw some of the most positive changes in India’s retail scenario with policy reforms that have proved Government’s commitment towards making the country a favourable and attractive sourcing as well as retail destination. Besides, it’s a well-known fact that the Indian fashion retail market values about US $ 50 billion in 2019 and is set to grow to US $ 115 billion by 2027.

This vibrant and lucrative fashion retail destination, coupled with the Government’s support, is catching the eye of major international fashion brands. Parfait, Under Armor, Uniqlo are some of the big overseas brands that forayed into the vibrant Indian fashion retail market in 2019.

The expansion hasn’t seen the development all of a sudden. During last couple of years, the industry kept demanding for the relaxed FDI norms for retailers. And, until 2018 end, for single-brand retailers with over 51 per cent FDI, the policy required 30 per cent of value of goods to be procured from India as part of the local sourcing requirement. However, in August 2019, India relaxed local sourcing norms for single-brand retailers with foreign direct investment (FDI) and allowed them to sell online even before setting up physical stores.

Expansion of overseas companies in manufacturing –Year 2019 is said to be one of the finest years in recent time for the Indian apparel manufacturing industry. The country has somehow been able to restructure itself and rose around 7 per cent in its apparel exports to the world till October. This growth came at a time when the competitors of India in apparel manufacturing are seeing advantages in establishing factories in India. This is why some big international manufacturing giants announced expansion in India in 2019 to capitalise on the trend.

Hong Kong-based Epic group announced US $ 20 million investment in Ranchi. The investment is expected to generate around 24,000 employment opportunities in the manufacturing unit for the people of Jharkhand, which is expected to produce 15 million units of garments.

Another major expansion has been confirmed by one of the major Sri Lankan apparel manufacturing companies, Brandix. The company has recently proposed to expand its production base in the state with a potential to create 22,000 more jobs. It has already been providing employment to around 22,000 people at Special Economic Zone in Visakhapatnam, Andhra Pradesh.

2. Start-up culture grown significantly –While announcing a start-up-friendly Union budget in July this year, the Government has made its agenda clear of addressing the issues of unemployment and reviving the ailing economy, which necessitated building confidence of start-ups and SMEs through policy amendments in their favour. 2019 has produced over half a dozen unicorn start-ups, 8 to be precise. Despite the arduous journey of navigating through an economic slowdown and stiff competition, homegrown ventures managed to garner US $ 7.67 billion in the first 9 months of 2019. A remarkable feat, as these start-ups are attracting more and more international investors to splurge upon a gamut of innovations, taking each industry by storm. Clovia, Zivame, Fynd, CouchFashion, CutomitNow, Styched, Vajor and Zinnga are some of the start-ups that have grown multiple times in 2019.

Bengaluru-based Styched, an affordable, fast-fashion ecommerce venture, has raised angel funding of US $ 2.30 million from a clutch of angel investors. Lingerie brand Zivame has already reported that, as of September 2019, it has hit a Rs. 300+ crore revenue.

In another major development, Fynd caught the eye of Reliance Industries which is set to acquire 87.6 per cent stake in the e-commerce platform for US $ 42 million, according to a Reliance Industries’ filings in the Bombay Stock Exchange in the 2nd half of 2019. According to the terms of the deal, RIL has the option to further invest up to US $ 14 million in Shopsense Retail Technologies, the parent company of Fynd, by December 2021.

Flipkart even introduced a Hindi interface for its customers in 2019 to help them understand its platform easily in rural areas pan India. On the other hand, Amazon claimed that around 65 per cent of its sales came from Tier-2, Tier-3 and Tier-4 towns and cities. More than 80 per cent of its new customers also came from these places and one out of every 3 customer purchased from the fashion category.

4. Textile policy reforms –Special package for the apparel industry, demonetisation, GST and change in labour laws are four major policy-level decisions of the Government in recent years,which have impacted the overall economy as well as the apparel and textile industry. 2019 will be known as a renewal year for National Textile Policy.

Another reform done in 2019 was the introduction of Rebate of State and Central Taxes and Levies (RoSCTL) policy. This WTO-compliant scheme rebates the embedded taxes including central excise duty on fuel used in transportation, embedded CGST paid on inputs, purchases made from unregistered dealers, inputs for the transport sector, embedded CGST and compensation cess on coal used in the production of electricity.

5. US-China trade war: Dominated trade discussion –US-China trade war was among the major issues across the global apparel and textile industry all through 2019. The United Nations Conference on Trade and Development (UNCTD) has reported that India got an overall benefit of US $ 755 million and Vietnam of about US $ 2,601 million from this trade war. Right from the beginning of the trade war, Vietnam received more orders from US clients, but the country’s industry is concerned about the effects of the influx of Chinese firms escaping tariffs – while India, being totally indigenous, was in a better state. Particularly in October ’19, the USA imported US $1.10 billion worth of fewer garments as compared to October‘18. China alone suffered US $ 1.09 billion loss to that. If we talk about India’s performance, the country was up by 9.70 per cent in volumes and 11.25 per cent in values in its RMG exports to USA (its largest export destination) in the October month.

6. Sustainability –More than social sustainability, environmental sustainability was the highlight of 2019. This has become the buzzword now and everybody in the fashion industry is talking about 4Rs: Reuse, Reduce, Rework and Recycle. The first 3Rs are more of the social approach to sustainability, while the major debate is happening over ‘Recycle’ which is more of technical approach in sustainability. Putting up ETP plants and solar plants in a factory was the thrust initially since calculative return on investment (ROI) was easier and manageable.

Plastic used in packaging is another major thrust for which no particular sustainable alternative has yet been identified. Secondly, despite a lot of talks, many questions related to what happens to the end bits of waste plasticare still unanswered . All these issues have been addressed by the industry through 2019 and it is expected that 2020 will take these discussions forward. This is necessary because the consumers are demanding more sustainable fashion products and the brands have to imbibe this concept strongly in their business approach. Therefore, both brands and manufacturers have to understand the significance of eco-friendly products and processes and should work together to make manufacturing more viable using effective implementation of social compliances and environmental sustainability in the coming years.

Many of these developments will feature as discussion points at the conference sessions during his annual initiative in February 2020. Apparel Sourcing Week is a perfect amalgamation of a sourcing exhibition along with a strong knowledge platform wherein experts from various segments of the industry share thoughts on current and future directions.