Lemon Tree Hotels boasts of maintaining a room occupancy rate of around 77 per cent against a national average of nearly 66 per cent. 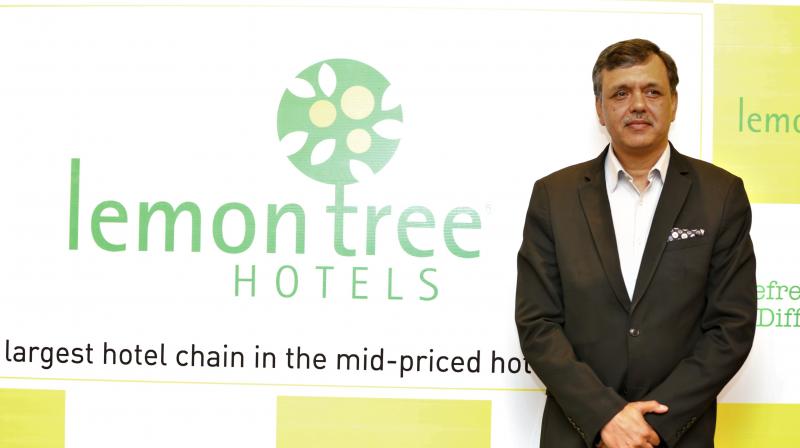 Kolkata: Lemon Tree Hotels, the country's largest hotel chain in the mid-priced hotel sector and the third largest overall, have plans to expand the tally of its hotels to around 107 in the next two years. It launched its 58th hotel: Lemon Tree Premier with 142 rooms at New Town in Kolkata on Wednesday.

The 14-storeyed property, which came up at an investment of Rs 140 crores in the past one and half years, is the first property to be built and operated by the reputed hotel chain in West Bengal also. Lemon Tree Hotels also manages a hotel in Siliguri in North Bengal and another in Gangtok.

Lemon Tree Hotels chairman and managing director Patanjali Keswani said, "We are happy to enter Kolkata with our upper midscale brand Lemon Tree Premier. Kolkata is a gateway city to the East and an important destination for both business and leisure travellers. It is our second hotel in West Bengal after Siliguri."

He added, "The hotel is strategically located in close proximity to the business and IT hub of New Town, SEZs, Rajarhat, Salt Lake, DLF IT Park, Unitech Commercial Complex and Ecospace.

This hotel, like Mumbai and Pune, showcases a new design style that blends nostalgia with chic interiors and modern amenities."

Sharing the company's roadmap its senior vice president (operations) Sumant Jaidka said, "We have a target to operate around 107 hotels with 10,500 rooms across 57 cities by 2021. Many of these will be run on management contract. Within a month or so we are opening a hotel at Udaipur also. It is built by us and it will be run by us also."

He elaborated, "In the next two years, two more such will be launched in Mumbai and Shimla. We are looking for expanding our network in the North East market. With our entry in Kolkata, we now have 58 hotels with 6000 rooms across 35 cities. Out of 58, 33 are owned by us while the rest are managed by us."

Lemon Tree Hotels is also eyeing to expand its network overseas: Dubai and Bhutan. Mr Jaidka added, "But these are not yet confirmed. Our moto is to go wherever the Indians go."

On the company's growth rate projection, he expected a jump of around 14 per cent this year in constrast of 18 per cent last year. According to Mr Jaidka, Lemon Tree Hotels boasts of maintaining a room occupancy rate of around 77 per cent against a national average of nearly 66 per cent.