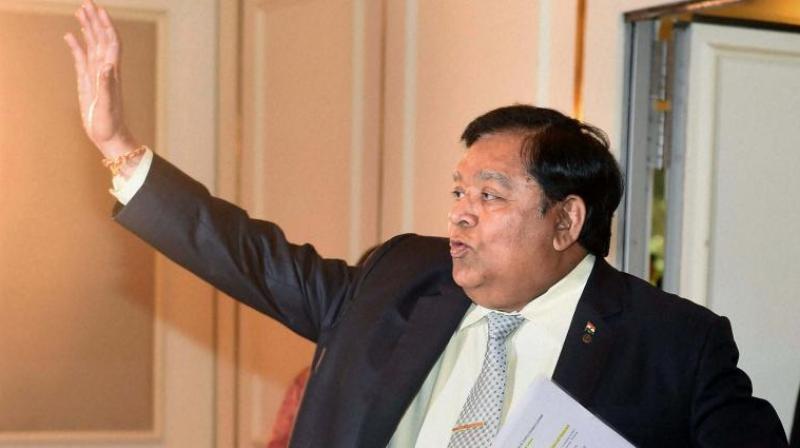 On Tuesday, A M Naik addressed his last AGM of Larsen & Toubro where he served for 53 years. (Photo: PTI)

Mumbai: After serving the largest engineering conglomerate for almost 53 years, 14 of them as the chairman, Larsen & Toubro (L&T) Group executive chairman AM Naik on Tuesday bid farewell to the shareholders at his last
annual general meeting.

After Naik delivered his last AGM address as chairman, the audience comprising shareholders and top management & executives at the St Andrew's College Auditorium at upsacle Bandra, gave a standing ovation to the man who steered their company for almost two decades.

Addressing the shareholders, an emotional Naik, otherwise known for his serious demeanour, said: "This AGM is indeed a special one for me. A milestone in my long career. Although I will continue to address you as the chairman, this
is the last time I will be doing so in an executive capacity.

"I take this opportunity of journeying back along the road I have travelled for 53 years, with special focus on the last 18 when I have been privileged to lead the company," an emotional Naik, who joined the company way back in 1965 as
trainee, said.

He first greeted the new chief executive and managing director SN Subrahmanyan, who took charge of the diversified group from July 1, with a bouquet. "I welcome Subrahmanyan.. your company is in good hands...He is your next guy who will take care of the day to day activities. I won't be the day-to-day guy. I've mentored him for many years. I ensured the transition is smooth and it was very well planned," he said and handed over the bouquet.

While he sat down after briefly introducing Subrahmanyan, the rest of the board members along with shareholders continued to give him a standing ovation.
Naik said he has mentored 25 top executives.

"I have always believed that the succession planning is vital for an organisation's sustainability. In 2014, I had indicated that Subrahmanyan would be my successor. Rest assured, your company is in very good hands," Naik, the son of a Gujarat primary school teacher, added.

Subrahmanyan told shareholders: "It's been an incredible learning from you Sir (Naik) about the passion, commitment, involvement, engagement and devotion which one can bring to the job. Your amazing qualities of making use of every working minute to make everyday meaningful towards the organisation's growth is a superb way towards creating value".

He further said Naik has taken L&T from a good engineering company to the largest EPC one in the country, which also provides the services in the field of IT, finance and real estate.

"Growth in sales, profitability and shareholder values have been so immense and humongous that I doubt that anybody else at L&T would ever be able to do that again. It's path-breaking and awe-inspiring. You have done the impossible.

Probably to repeat the same would be a huge task," Subrahmanyan added.