Whitman said that she is 'going to take a little downtime, but there’s no chance I’m going to a competitor.' 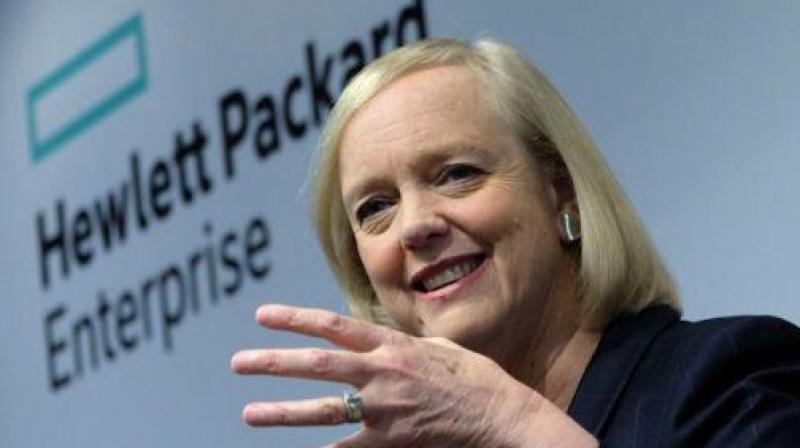 Meg Whitman on Tuesday announced that she will step down as chief executive of Hewlett Packard Enterprise Co. (Photo: AFP)

Meg Whitman on Tuesday announced that she will step down as chief executive of Hewlett Packard Enterprise Co, ending a 6-year tenure that included overseeing one of the biggest corporate breakups in history.

Shares of HPE fell more than 6 per cent in after-hours trading.

Hewlett Packard Enterprises, known for its computer servers, is still adjusting to a new landscape in which corporate customers are placing more of their digital operations in the cloud and moving away from purchasing their own equipment.

Whitman, one of the most powerful women in U.S. business and a former candidate for California governor, split Hewlett Packard Co into HPE and PC-and-printer business HP Inc in 2015 as part of a plan to turn around the large corporation. She aggressively shed assets and cut tens of thousand of jobs as HPE sharpened its focus on server and networking businesses.

Taking over for Whitman in February will be Antonio Neri, a relatively unknown HP executive who has been with the company for nearly a quarter century and currently serves as HPE’s president. Neri is a trained computer engineer and has worked in every one of HPE’s businesses, Whitman said during the company’s earnings call on Tuesday. Neri did not speak on the call.

“We have a much smaller, much nimbler, much more focused company,” Whitman said during the call after Bernstein analyst Toni Sacconaghi said the move felt abrupt. “I think it is absolutely the right time for Antonio and a new generation of leaders to take the reins.”

Neri will join HPE’s board of directors and Whitman will remain on the board as well.

Whitman’s retooling of HPE included September’s spin off of HPE’s enterprise services and software business to British software company MicroFocus International Plc and acquired companies, including Aruba and Nimble Storage. This month, HPE announced it is selling its Palo Alto, California, headquarters, which the company has held for six decades.

Shares of HPE have risen nearly 47 per cent since the split up, outpacing the 27.8 per cent rise in the S&P 500 index during the same period. Whitman is leaving just as it is time for an executive with technical prowess to come in and retool the company’s offerings, said Ilya Kundozerov, equity analyst with Morningstar.

”HPE is more focused and more agile than ever before,“ Kundozerov said. ”A CEO with tech background can help HPE to improve its innovative edge.”

Whitman, who previously headed eBay Inc, was reported to have been a leading candidate for chief executive job at Uber Technologies Inc before it was given to Dara Khosrowshahi.

Whitman ran unsuccessfully for California governor in 2010, and she has served on the presidential campaigns of Republican former Massachusetts Governor Mitt Romney and New Jersey Governor Chris Christie. She endorsed Democrat Hillary Clinton in the 2016 U.S. presidential election.

She stepped down from the board of HP Inc in July and joined the board of Dropbox in September. Whitman said on Tuesday’s earnings call that she is “going to take a little downtime, but there’s no chance I’m going to a competitor.”

She told Reuters that she is not preparing another run for public office.

”I stay active in politics by contributing to candidates from both sides of the aisle who I agree with on core issues, but aside from that, I have no plans to get involved directly,” Whitman said in a statement.

Although Whitman is one of the most prominent executives in Silicon Valley, with a career that spans startups and older businesses, she is not a household name in California, despite her run for governor, said Elliott Suthers, senior vice president with Grayling public communications and communications and media adviser for the McCain/Palin 2008 presidential campaign.

”To run against a relatively popular incumbent like [Sen. Dianne Feinstein] she’d need to spend record amounts to get within striking distance,” Suthers said. “Outside of Silicon Valley, she’s still a largely unknown quantity. Voters have a pretty short memory and her positions have undoubtedly shifted since 2010.”

Excluding items, it reported earnings of 31 cents per share. Revenue rose 4.6 per cent to $7.66 billion.

Analysts were expecting fourth-quarter profit of 28 cents per share on revenue of $7.78 billion, according to Thomson Reuters I/B/E/S.