Sangeeta Navik of Jaunpur overtook 7 mn participants to emerge as one of the ultimate winners; receives the car with grand celebrations. 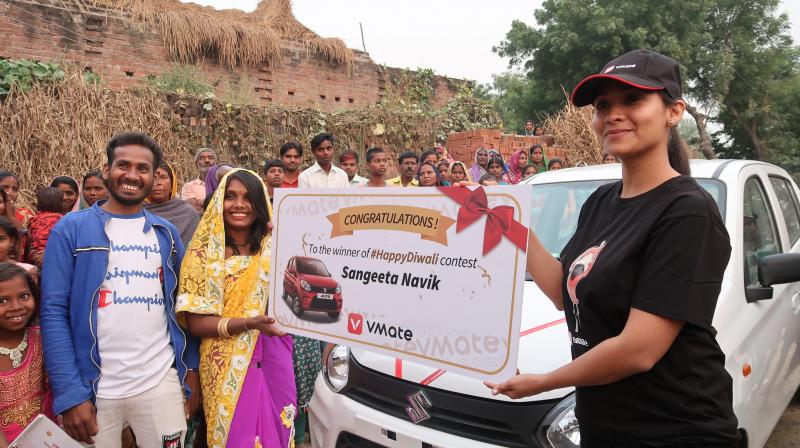 Overwhelmed with the achievement, the family welcomed the car as a new family member and prayed for its long life.

Varanasi: VMate, the trending short video platform today handed over its grand prize “Maruti Suzuki Alto” to Sangeeta Navik, a small-town housewife hailing from Jaunpur, UP. Sangeeta started using VMate for entertainment purposes but soon realized the potential of the app and started sharing her own videos. While participating in VMate’s “Roshan Karo India” Diwali Campaign little did she know that soon her talent will be recognized and her dream of reaching millions through her dancing skills will be a reality.

VMate recently concluded its three-week-long Diwali Campaign and announced Sangeeta Navik as the winner for its grand prize along with lakhs of users who won gifts ranging from guaranteed vouchers, prize money, gold coins, smartphones, TVs and Honda Activa. As the VMate team visited Jaunpur to deliver the car to Navik; the winner's family, neighbours and others in the locality received the team and the car with a grand ceremony. Overwhelmed with the achievement, the family welcomed the car as a new family member and prayed for its long life. Ms. Sangeeta has now become one of the few car owners in her locality but the first one to have won a car basis sheer determination and talent. Sangeeta is a housewife living in an 8-members family and her husband is a contractor. She has a keen interest in dancing and acting but due to limited resources, she never got an opportunity to take professional training. However, when she started using VMate in March 2019 she started to focus on her gift and captured her raw skills in VMate videos to entertain others.

On the occasion of winning the car, Ms. Sangeeta Navik said “I couldn’t believe at the beginning as I never thought I could win such a prize basis my participation. VMate has completely changed my life as it has given me the confidence to explore my talent and realize my full potential. I could never imagine such luxuries in our life as I just wanted a good house for me and my family. I am very thankful to my husband and family members who supported me from the beginning and helped me show my talent.”

On successful conclusion of VMate Diwali Campaign, Ms. Nisha Pokhriyal, Associate Director- VMate, said, “We are happy to announce that Sangeeta Navik won the highest reward of the campaign. I am sure her success story will inspire talented people with limited resources, to embrace new opportunities provided by VMate. Our platform provides an opportunity for any user to achieve growth and fame without limitations.”

VMate empowers users to explore and exhibit their video creation and editing skills through user-friendly in-app features. Be it a professional, a novice or someone who has never tried hands at video creation, VMate is a platform for all to express and realize their dreams. The 3 weeks long Diwali campaign drew users to create engaging music videos by leveraging unique and easy-to-use video editing features of the app to lighten up different Indian states.

VMate is already a popular platform in regional markets, where users from various towns & cities are grabbing opportunities to win prizes and earn fame. Recently, by leveraging VMates' collaboration with Nach Baliye Season 9, one of the VMate users grabbed an opportunity to get featured on the national television as he danced with celebrities during the popular dance reality show. VMate’s campaigns during festivals and days of national importance are emerging as important social media initiatives attracting significant traction from their users and content creators.