The girl who works in Hyderabad was on her way to airport to catch a flight to her home in Delhi. 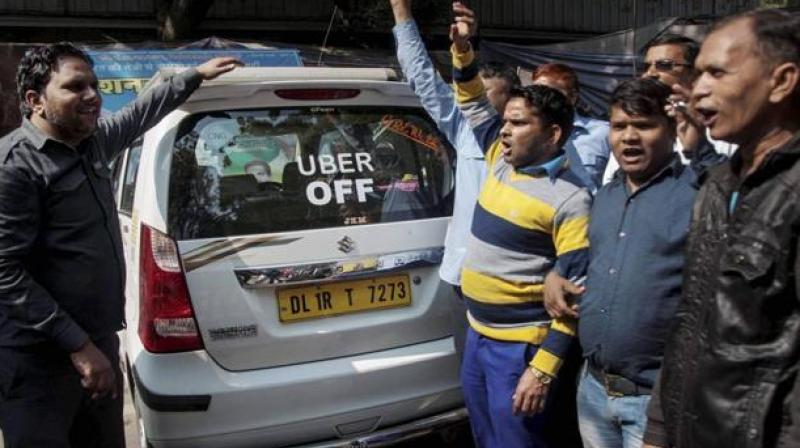 Recently, some Uber drivers shut their services while pressing for their demand. (Photo: Representational/PTI)

Mumbai: A Delhi girl who works in Hyderabad has a horrible story to tell. She says she had worst experience while she was riding an Uber car on her way to airport to catch a flight to her home in Delhi for Diwali vacations.

Unlike many other girls who choose to keep mum and don't bring to fore such incidents, the girl decided to speak up and shame the culprit in public by describing his act in a Facebook post.

A report on NDTV says 25-year old Uma Sharma is originally from Delhi. She had shifted to the southern Indian city for work only recently. Sharma in her Facebook post gives a detailed account as to what exactly happened on the fateful day. She also attached a screenshot from the Uber app.

According to her, the driver stopped his act only after she kept screaming at him. After landing in Delhi, she tried to lodge a complaint with the police there but her attempt went in vain. The cops told her they cannot file an FIR as the incident did not happen within their jurisdiction.

"I have spoken to the ADCP (SHE Team - Cyberabad Police Commissionerate) who has assured me that they'll file the report once I go back to Hyderabad next week," she continues to narrate the story in her FB post.

She also writes Uber India confirmed the driver had been fired, but offered no other updates. "Uber's response in terms of this incident has been pretty generic- they've fired the guy, apologized etc. But there's no update on how they're looking to solve for this," she told NDTV.

"...I choose to speak up and I won't stop until #UberIndia takes responsibility for their non-existent driver verification and complete disregard for their passengers safety," she says in the post which has been shared 400 times on Facebook.