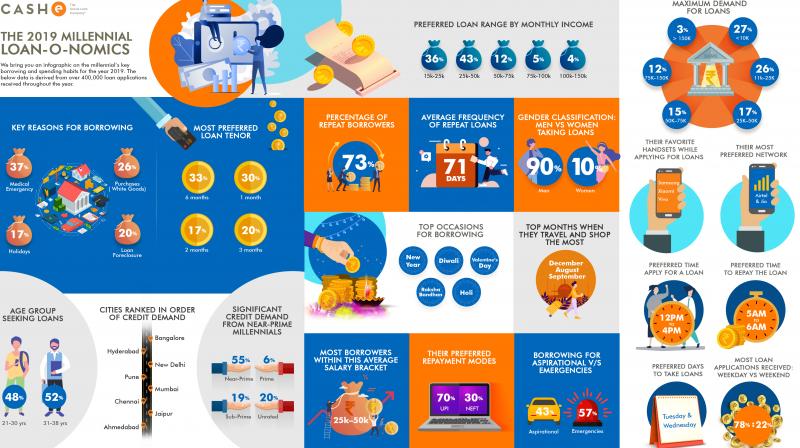 Mumbai: CASHe, India’s leading digital lending company for young salaried professionals, today released its 2019 report on the millennials key borrowing and spending habits.  According to the report, medical expenses and consumer durable purchases topped the chart for reasons why millennial availed digital loans all through 2019. They were closely followed by loan foreclosure and holidays. CASHe who specifically caters to the millennial segment of the population undertakes customer data analysis on an annual basis.

Christened as the ‘ The 2019 Millennial Loan-o-Nomics’, the report analyzed data of an active pool of over 400,000 loan application received from customers outlining multiple data points and key insights showcasing the typical consumption patterns, buying behavior and borrowing habits of millennial across India.

The findings delineate an astute, young population with financial aptitude much ahead of its previous generations. Most millennial prefer to move out of their parent’s place thus embarking on a journey of financial independence. Today, therefore the cohort juggles various responsibilities without compromising on their needs and aspirations. Small, personal loans are tailored to meet the present millennials needs who are faced with obstacles of expensive accommodation, higher education and travel. Often saddled with the repayment of hefty EMIs the moment they land their first job, digital lending with shorter lock-in periods is a saviour for especially for those with inadequate of zero credit history. Emergencies, like unforeseen medical expenses, are thus the reason why 37 per ent of millennial customers resorted to lending – a sharp increase from 31 per cent last year.

Averse to the manner in which millennial are being perceived, the CASHe data clearly outlines the purpose of borrowing among millennial being need-oriented rather than redundant. While ‘emergencies’ accounted for approximately 57 per cent of the borrowing, ‘aspirations’ accounted for 43 per cent.

Surprisingly,  only 10% of borrowers are women, reflecting the ratio of male to female application ratio on Cashe app. It suggests that women in this cohort are conservative when it comes to borrowing and spending! Hyderabad soars ahead in terms of millennial credit demand compared to last year, ranking second after Bengaluru, followed by others metros such as New Delhi, Pune, Mumbai, Chennai, Jaipur and Ahmedabad. Older millennials, between the ages of 31-38 accounted for about 52% of the loans taken, while the millennial cohort earning in the 25k-50k category presented the highest number of borrowers at 43 per cent, succeeded by those in the 15k-25k monthly income bracket at 36 per cent.

The data showcased that ‘71 days’ is the average frequency of repeat loans, while 73 per cent of the applicants are repeat users. In terms of loan size, a majority of them (27 per cent) preferred small ticket loans of under Rs. 10,000 and the data indicated a significant credit demand from near-prime millennial accounting for approximately 55 per cent. This reinforces the idea that millennials are actually quite financially disciplined – repaying loans on time and dispelling their image of being irresponsible spendthrifts.

Despite the stark differences between the spending habits of millennials and Gen X, some things remain comfortingly constant. Even with an increasing number of people living away from their families to pursuit of jobs, they continue to imbibe the spirit of Indian festivals with great enthusiasm. This is why ‘Christmas’, ‘New Year’ and ‘Diwali’ ranked among the top occasions when millennial availed digital loans. August, September and December represented the peak period for digital lending, as the segment actively indulged in shopping and travelling, whereas Samsung, Xiaomi and Vivo arose as the most preferred handsets for the cohort.

On the occasion, CEO of CASHe, Mr. Ketal Patel said, “Millennials, I believe is one of the most misunderstood segment of the present times. Lower savings and higher spending by millennials is being caricatured to present them as financially irresponsible dreamers, much averse to reality. Their spending and borrowing behavior reflects where they are currently in their lives -- settling down, renting out, new job, starting families’ etc. CASHe believes millennials are ‘achievers’ - independent at an early age and nurturing the attitude to grow while combating multiple challenges through financial discipline.”

“The Indian banking infrastructure has not evolved enough to include the gamut of needs by this emerging section of the population and this is where new-age digital lending companies like CASHe step in – an industry estimated to touch $100 billion by 2023. Representing the ‘chief wage earners’ and the largest demographic cluster of the country, millennials are redefining the Indian consumer story and thus have the potential to deliver the country from the current economic upheaval. It is therefore essential to create an ecosystem that matches their needs, while driving initiatives to bridge the gap between male and female borrowing, in order to truly create a financially inclusive economy” he further added.