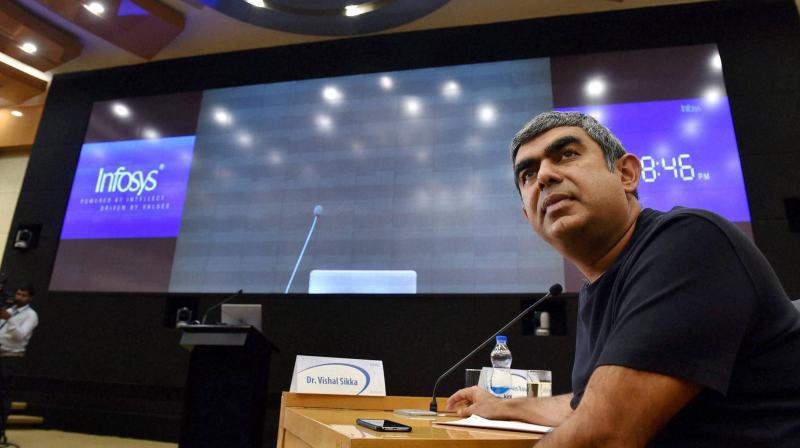 Vishal Sikka on Friday informed Infosys employees in an email about his resignation as CEO and managing director. (Photo: PTI)

New Delhi: As an action-packed day unfolded at Infosys with the abrupt exit of CEO Vishal Sikka, amused twitteratis exhibited their witty sides with hilarious digs and puns around an otherwise acrimonious corporate drama.

At the same time, corporate bigwigs like Anand Mahindra took to Twitter to lend support to the 'iconic' company. "Crises are like a furnace that forges more durable steel. Infy is iconic & will always have people cheering for it. I certainly will..," he said.

Harsh Goenka, Chairman of RPG Enterprises, had a funny take on the exit when he tweeted, "Post demonetisation, old 'sikkas' not working. 'Vishal' change in #Infosys. Old guard wins".

On a more serious note, he said, "We live in times when wisdom is often lost amidst hubris. Time to question role of founding members when they've passed the baton #Infosys."

That said, there were umpteen jokes and pictures that seemed to capture the lighter side of the entire episode. One twitterati (@secret_saanta) posted a still from an old black and white movie that showed five people pointing a gun, with the caption "Infosys founders whenever Vishal Sikka tried to take independent decisions".

Another one (@sidin) shared a joke on a imaginary conversation between founders NR Narayana Murthy and Nandan Nilekani (also former Aadhaar chairman). The make belief conversation has Murthy saying that a new CEO needs to be found, to which Nilekani replies "no problem, I have everybody's contact details".