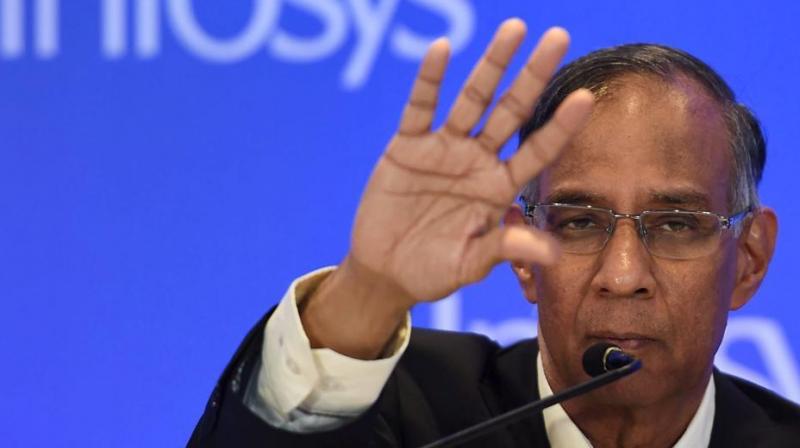 R Seshasayee, Infosys board chairman, had on Friday said the company was committed to returning shareholders money. (Photo: PTI)

Mumbai: A day after Vishal Sikka's unexpected exit as CEO and MD from Infosys on Friday, the IT bellwether on Saturday approved its share buyback plans announced on Thursday. Sikka's resignation comes after months of exchange of cold vibes between Infosys founders and management over a hefty severance pay and huge remuneration to top bosses.

The company wants to return Rs 13,000 crore to shareholders by purchasing shares. Infosys share prices surged over 4 per cent on August 17 when the announcement was made, thus taking the value of share to Rs 1,015 apiece.

The board of Infosys chaired by R Seshasayee has approved a buyback of up to 11.3 crore shares, or 4.92 per cent of equity, at Rs 1,150 each, Bloomberquint reported on Saturday. The buyback price fixed is at 25 per cent premium of Friday's close of Rs 923 a share.

On Friday, Seshasayee had said that Infosys will not change its share buyback plans even after Sikka's sudden exit as it was now committed to returning money to shareholders. The approval to Infosys' share buyback plan that was unveiled on August 17 was as per market expectations.

Sikka's untimely exit turned out to be a bloodbath for Infosys at markets as its stocks tumbled by more than 10 per cent on Friday. At the closing hours, shares ended a near 100 points lower at Rs 923 apiece.

The shock of Sikka's exit was such that the resultant crash of IT giant caused Rs 30,000 crore loss to listed companies index. Infosys also witnessed its market value coming down by Rs 1,000 crore at one point during the day. The market capitalisation of the listed companies came crashing down from Rs 1,34,000 crore to Rs 1,04,000 crore, according to reports.