The minister said "We don't need support of lower taxes to encourage renewable energy. By itself, it is good for the nation. 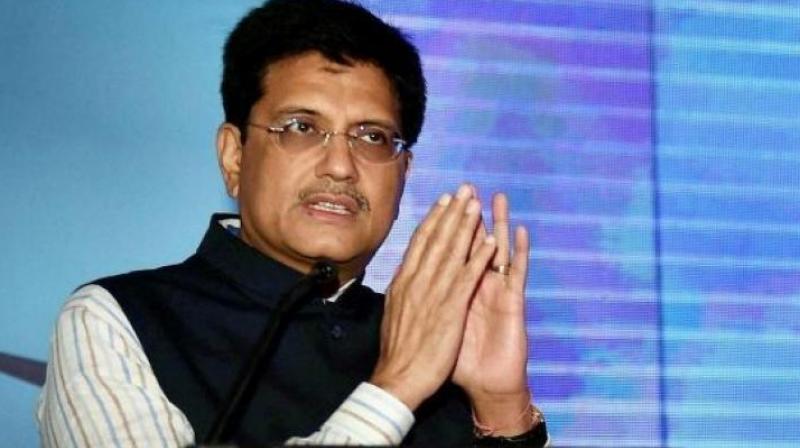 New Delhi: With renewables tariff already touching new lows, Power Minister Piyush Goyal today said there was no need for lower taxes to encourage clean energy and the GST regime will have no impact on power rates.

However, the minister is hopeful that lower GST rate of 5 per cent on coal, compared to existing 11.69 per cent, would help discoms provide power at affordable rates. "We don't need support of lower taxes to encourage renewable energy. By itself, it is good for the nation.

It reduces pollution. It give discoms 25-year long affordable power at prices which are even below grid (parity price)," Goyal told reporters when asked if the new Goods and Services Tax rates would impact clean energy in India.

Yesterday the GST Council had finalised the rates on various products including renewable energy equipment which has been kept in the 5 per cent slab. Solar power tariff dropped to all-time low of Rs 2.44 per unit which is below the grid parity price. Similarly under the wind power auction for 1GW, the tariff dipped to Rs 3.46 per unit.

The new rates of solar power discovered in the auctions are even below the average rate of coal-based power produced by NTPC at Rs 3.20 per unit. The minister said,"Solar power prices have gone below grid parity.

Wind power prices are also almost at grid parity despite only one bid (auction for 1GW)." He added that the situation today is very different from the past as "We can stand on our feet".

Goyal said, "Twenty five years later, other forms of power would be 3-4 times higher. Solar, wind and hydro would be affordable forms of power. I don't think GST rates will impact my sector's tariff."

Explaining further he said, "The GST regime is designed to help bring down costs. As we have seen rates unfolding yesterday, we are little more encouraged that the GST will help bring one nation one tax and help the nation to reduce corruption and difficulties in operation and also bring simpler tax regime."

About lower rates on coal under GST, he said, "The coal sector will also benefit (due to GST) with straight away benefits to consumers because (higher) taxes used to be a burden on consumer of India. I am delighted that the GST council has chosen to keep coal at 5 per cent slab.

I am sure that this will help discoms serve the poor and rural consumers with more affordable rates." About keeping UPS and inverters in higher tax bracket, he said, "UPS and Inverters are the thing of past. Please don't go back to past. We don't need UPS/Inverters and Converters anymore."