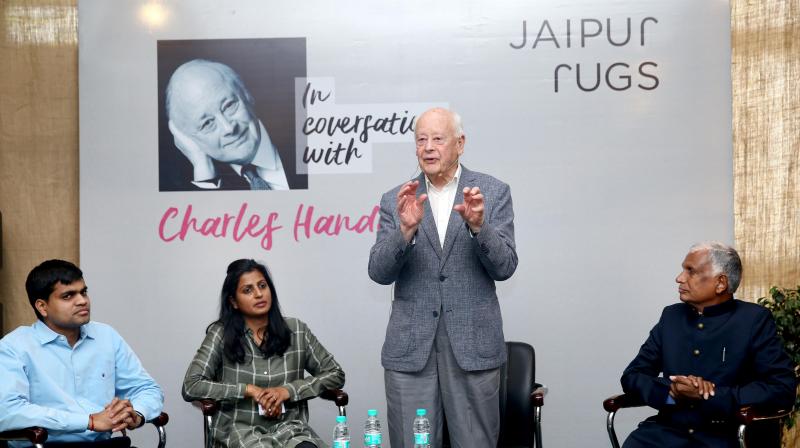 Mr Handy is one of the most respected business thinkers globally and an expert on Organisation Culture. He received the lifetime achievement award in 2011 and he was rated second on the Thinkers 50 list (a private list of the most influential living management thinkers) in 2001. He was placed second in the first-ever survey of the World’s Management Gurus, which had business icons Bill Gates and Richard Branson appearing on the 9th and 29th positions on the same list.

Mr Charles Handy while addressing the industry leaders said, “Jaipur Rugs works on unique bottoms up system where the success of organisation depends upon the people who are making the rugs which is unique as most of the organisations work top to bottom concept.  I feel that the mantra for successful and sustainable future organisations is growing together.”

Jaipur Rugs works with close to 40,000 artisans in 600 villages in India, providing families with sustainable livelihood at their doorsteps. Integrating current designs with the sustenance of poor communities, Jaipur Rugs brings weaver’s art directly to homes and delivers not just a carpet but the blessings of a family. To study the business model of Jaipur Rugs, Mr. Handy along with Mr. Nand Kishore Chaudhary will visit artisans in different villages of Rajasthan.  Mr. Handy along with Mr. Nand Kishore Chaudhary addressed more than 100 industry leaders on building sustainable business model which he thinks is the future of building successful businesses.

Jaipur Rugs is a social enterprise that has worked towards eliminating the middlemen and ensuring fare wages for artisans. Reviving the dying art of carpet weaving and creating a sense of bonding and community is at the core of the company’s business philosophy. Every carpet has a weaver’s story behind it and the people live through the emotions of the artisans every time they look at the rug. The company has been successful in bridging the gap between the weaver at the grassroots and the urban consumers. This aligns perfectly with the business philosophy championed by Handy throughout his career.

Mr Handy’s thoughts can be well understood with his words from a 1990 seminal lecture at the Royal Society for Arts in London on the topic ‘What is a Company for?’ where he said, “A company ought to be a community, a community that you belong to, like a village. Nobody owns a village. You are a member and you have rights. Shareholders will become financiers, and they will get rewarded according to the risk they assume, but they’re not to be called owners. And workers won’t be workers, they’ll be citizens, and they will have rights. And those rights will include a share in the profits that they have created.”

Jaipur Rugs started in 1978, when N K Chaudhary borrowed a sum of Rs 5000 from his father and started his journey with 9 artisans and two looms on principles of Equity, Empathy and Dignity. He started by eliminating the middlemen between the weavers and the company and for 40 years, the company has worked to bridge one of the deepest gaps in the industry, the one between the weaver and the consumer. Today, Jaipur Rugs works with close to 40,000 artisans in 600 villages in India, providing families with sustainable livelihood at their door steps. Integrating current designs with the sustenance of poor communities, Jaipur Rugs brings weaver’s art directly to homes and delivers not just a carpet but the blessings of a family.

Jaipur Rugs offers a curated line-up of contemporary to transitional and eclectic carpets handmade in rural India. Each of their rugs passes through 180 hands, perfecting the timeless art of handmade rugs.  Jaipur Rugs continues to work with over 2500 women yarn spinners from Bikaner to spin yarn on a rudimentary ‘charkha’, consciously choosing not to replace hundreds of hand-spinning jobs with machines. The designs are grounded with the understanding of living spaces and intelligent functionality. A Jaipur Rugs consumer not only owns a piece of art that they can walk on, but also get connected with the emotions of the weavers imbued in each knot.

In the last 5 years, the company has won 27 international and national awards for product excellence as well as social impact.

Facts and figures about Jaipur Rugs

Nearly 80 per cent of Jaipur Rugs weavers are women who take pride in working from their own homes. From the tribal belts of Gujarat to diverse communities in 5 states of India, these women represent what the company calls the ‘Creative Caste’. They have not had a fair share of opportunities but now have found their voices and dignity within their communities.

Unlike the practices of the standard carpet industry, Jaipur Rugs women weavers have now gone on to become BunkarSakhi (weaver’s friend) - a managerial and leadership role emerging from grassroots, that was traditionally only executed by men.

Jaipur Rugs products are sold in more than 135 cities globally and find themselves in the window displays of retail stores in the world’s top cosmopolitan cities, redefining consumer aspirations.