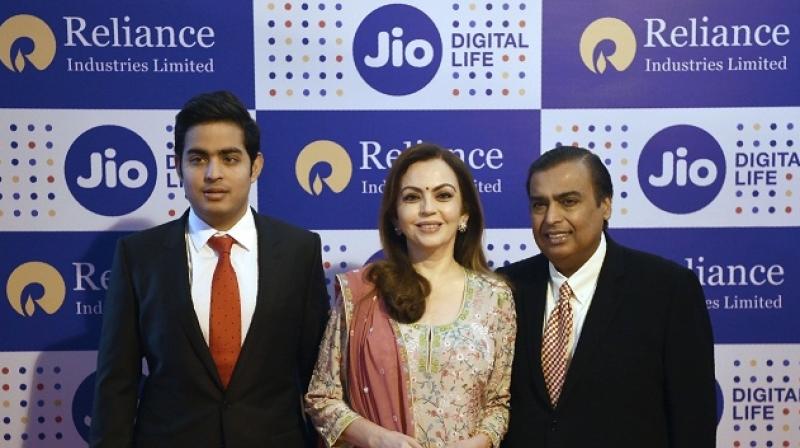 Mumbai: Reliance Industries Ltd’s telecoms arm Jio will turn profitable “shortly,” the Indian conglomerate said on Friday, while adding it would continue to pump around $1 billion into the venture for each of the next few quarters.

Oil-to-retail giant Reliance, controlled by India’s richest man Mukesh Ambani, suggested there were signs its costly gamble was paying off. Jio racked up Rs 61.47 billion ($947 million) of revenues in the three months to Sept. 30, though made a loss of Rs 2.71 billion.

Jio’s net debt stood at Rs 490 billion, Srikanth said, adding that parent Reliance’s debt will peak in the quarter to December or the next quarter, after which it will begin sliding, suggesting robust growth for the conglomerate.

Reliance will continue to spend around Rs 70 billion a quarter on Jio for the next few quarters, Anshuman Thakur, Reliance Jio’s head of strategy said. Reliance has poured more than $30 billion into Jio so far.

To woo customers to Jio’s network, Reliance in July launched a $23 phone that blurs the lines between a smartphone and a basic feature phone.

The wireless carrier reported an average revenue per user (ARPU) of Rs 156.4. The country’s top wireless carrier Bharti Airtel’s ARPU was Rs 154, while smaller rival Idea Cellular’s APRU stood at Rs 141 in the April-June quarter. Jio’s subscriber base swelled to nearly 139 million at the end of September.

“It will not be a surprise if they break-even or turn a profit in the last quarter of this financial year,” said Jagannadham Thunuguntla, head of fundamental research at domestic brokerage Karvy.

On a standalone basis, including just its refining, petrochemicals and oil and gas exploration businesses, Reliance posted a 7.3 percent rise in its second-quarter profit, helped by higher margins from its refining and petrochemicals.

Net profit was Rs 82.65 billion in the quarter to Sept. 30, its highest ever. But that was below analysts’ average estimate of Rs 88.05 billion, Thomson Reuters data showed.

The refining and petrochemicals businesses delivered an 11.5 percent rise in quarterly revenue from operations to Rs 717.61 billion.

Gross refining margin (GRM), the profit earned on each barrel of crude processed, was $12.0 for the quarter, a nine-year high, but shrunk to $3.7 per barrel against the benchmark Singapore complex margins due to a falling price difference between light and heavy crude oil grades, Srikanth said.

Last quarter, the company outperformed Singapore’s benchmark GRM by around $5 per barrel.

On a consolidated basis, which also includes Reliance Industries’ U.S. shale gas, retail and other operations, profit came in at Rs 81.09 billion, the company said.

Ahead of the results, shares in Reliance hit a record high of Rs 890.7, rising as much as 2.1 percent.