Twenty-four more coaches will be fitted with this system within six months. 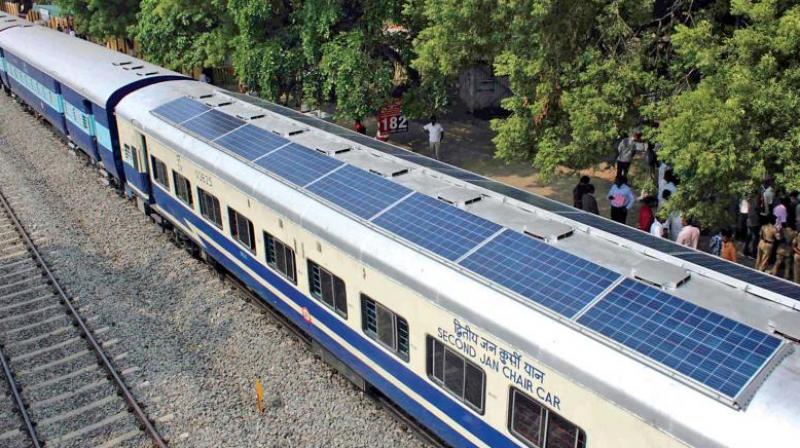 System reduces diesel consumption and the carbon signature of these commuter trains by reducing CO2 generation by 9 tonnes per coach per year.

New Delhi: The railways today launched its first solar-powered local train here with a battery bank facility which ensures sufficient power even in the absence of sunlight.

The entire electrical need of the coaches -- lights, fans and information display system -- will be met by energy produced by solar panels fitted on the roof of coaches of DEMU (diesel electric multiple unit) train.

Normally, DEMU trains -- a multiple-unit train powered by on-board engines without a separate locomotive -- provide power for its passenger comfort system i.e lights and fans from a diesel-driven generator.

The train was launched at the Safdarjung railway station here and the first rake will be put in commercial service over the suburban railway system of Delhi division shortly. Route will be decided soon, rail officials said.

While the 1,600 horsepower train has been manufactured at the Integral Coach Factory (ICF) in Chennai, its solar system and panels have been developed and fitted by the Indian Railways Organisation of Alternative Fuel (IROAF).

Twenty-four more coaches will be fitted with this system within six months. Referring to the Railways committment to using cleaner fuels, Prabhu said it was trying to increase the use of non- conventional sources of energy.

The IROAF has developed this system with a smart inverter which optimises power generation on a moving train to cater to full load even during night hours with the help of a battery bank which ensures sufficient electricity.

The system reduces diesel consumption and the carbon signature of these commuter trains by reducing CO2 generation by 9 tonnes per coach per year.

A solar power DEMU train with six trailer coaches will save about 21,000 litres of diesel and thereby save costs of Rs 12 lakh every year, the railways said.