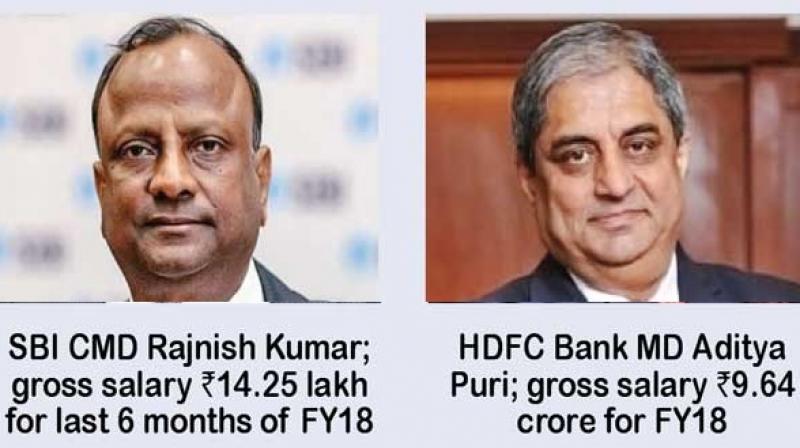 Mumbai: State Bank of India (SBI), one of the world’s 50 largest banks, pays a pittance to its top management personnel when compared to salaries earned by their counterparts in top private banks.

SBI chairman and managing director Rajnish Kumar drew a gross salary of Rs 14.25 lakh for six months since taking over as the bank chief in 2017-18. Kumar was elevated to the post on October 7, 2017. His remuneration as SBI chief consisted of basic salary of Rs 13.48 lakh and a dearness allowance of Rs 73,968 and other component of Rs 3,000, according to SBI annual report for 2017-18.

In stark contrast, the remuneration of Aditya Puri, managing director of HDFC Bank, was Rs 9.64 crore, says the bank’s annual report for 2017-18. He liquidated stock options worth Rs 31.4 crore during the year. Out of the total remuneration of Rs 9.64 crore in FY18, Puri’s gross salary was Rs 7.26 crore.

Other remunerations, including provident fund and tax exempted portion of superannuation, were Rs 55.89 lakh. If the Reserve Bank of India (RBI) approves the bonus to be paid to Puri, his salary would rise.

“At present, the bonus pertaining to the year 2016-17 proposed to be paid out in FY 2017-18 is pending RBI approval. After the RBI approval is obtained, the approved amount, if any, will be paid and disclosed in the corporate governance report for the next financial year,” said HDFC Bank in its annual report.

Ashvin Parekh, managing partner, Ashvin Parekh Advisory Services, said, “The CEOs and MDs of public sector banks also have more or less the same set of duties and responsibilities that one may see in case of private sector banks.

Despite a lot of promises and discussions by the government, the regulator and the Bank Board Bureau (BBB), the real changes are yet to be seen with regard to the compensation approach.”

He had said that state-owned banks tended to overpay at the bottom but underpay their top executives. Annual reports of ICICI Bank and Axis Bank for FY18 are not out yet. In 2016-17, Chanda Kochhar, MD and CEO of ICICI Bank, had earned a total compensation of Rs 6.09 crore. This is in stark contrast to the gross salary of Rs 28.96 lakh received by Arundhati Bhattacharya, who was the chairman of SBI then.

Similarly, Shikha Sharma, MD and CEO of Axis Bank, took home a basic salary of Rs 2.7 crore, and Rs 1.35 crore as variable pay, besides a host of perks and allowances like Rs 90 lakh HRA. Yes Bank MD and CEO Rana Kapoor, who also happens to be the bank’s promoter, took home Rs 6.8 crore as salary in 2016-17.