. The campaign aims to draw public attention to the need for according respect and safe passage to cyclists. 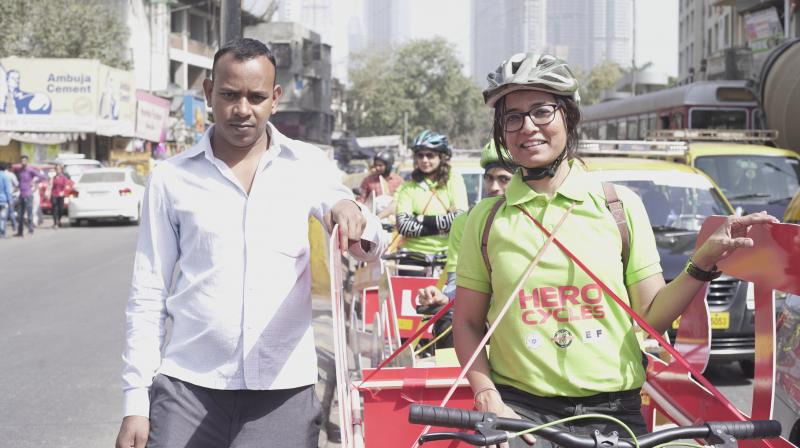 Road Safety Awareness is our biggest concern with increasing number of cyclists sharing the road in Mumbai City.

Mumbai: Hero Cycles in association with Smart Commute Foundation today launched a disruptive Road Safety Awareness campaign in MUMBAI with cyclists carrying replicas of cars riding out on the roads to deliver the message of road safety and demand equal respect and space for cyclists on the streets. The campaign aims to draw public attention to the need for according respect and safe passage to cyclists while promoting the use of bicycles as an environment friendly and healthy mode of transport.

Mr. Amitesh Kumar, Jt. CP Traffic flagged off the campaign from the Mumbai Traffic Police Headquarters at Worli, with six cyclists riding with car cut outs spreading out in pairs of two towards Sobo, Western & Central Suburbs. The cyclists who carried messages advocating more respectful and safe road sharing navigated their way during the peak traffic hours of a working day side by side with other motor vehicles.

Official spokes person from Hero Cycles says, “The idea was to send out a compelling message during the Road Safety Awareness Week’ to motorists about the safety and 'Right of Passage' of bicyclists on the road. The idea of riding a bicycle in the shape of a car was a novel one to not only grab eye balls but to ignite a conversation about safety on the roads. Hero Cycles has always endorsed 'Safe Cycling’ and keeps striving with government authorities to make city roads safer for bicyclists and help decongest roads by promoting cycling in a city”.

The idea is to subtly deliver the message of ‘Sadak Suraksha - Jeevan Raksha’ announced by the National Safety Council in association with the Ministry of Road Transport & Highways. Considering this, Hero Cycles has posted various safety messages on the CAR replica for motorists, two wheelers and pedestrians to engage the audience on the street with clear message of ‘RESPECT CYCLISTS’ and ‘SHARE THE ROAD’. Even the number plate of the cut out says ‘ZERO EMISSION’ implying how bicycles are an environment friendly mode of transport.

“Road Safety Awareness is our biggest concern with increasing number of cyclists sharing the road in Mumbai City. We wholeheartedly like to extend our support to Smart Commute Foundation who came up with this novel idea of ‘Car Cut Outs’ on bicycles to spread the message of inclusiveness and respect for cyclists on our roads,” said Mr. Amitesh Kumar.

The first Bicycle Mayor of Mumbai, Firoza Suresh, and Founder of Smart Commute Foundation is leading the safety awareness drive from the cycling community and working closely with the Mumbai Traffic Police. “There have been several instances of cyclists getting hit by cars in the recent past. Aside this, the cars consume most part of our roads leaving little space for cycling. Therefore, it became necessary to have a different approach to this problem. With this campaign, we want to sensitize the automobile drivers and urge them to Share the Road equally with the cyclist and pedestrians. This is a first of its kind initiative and part of our overall strategy to make Mumbai the Lighthouse Cycling Capital of India”