The mid-size luxury SUV produces a strong 252hp. It is the same engine that also does duty in the Audi Q7. 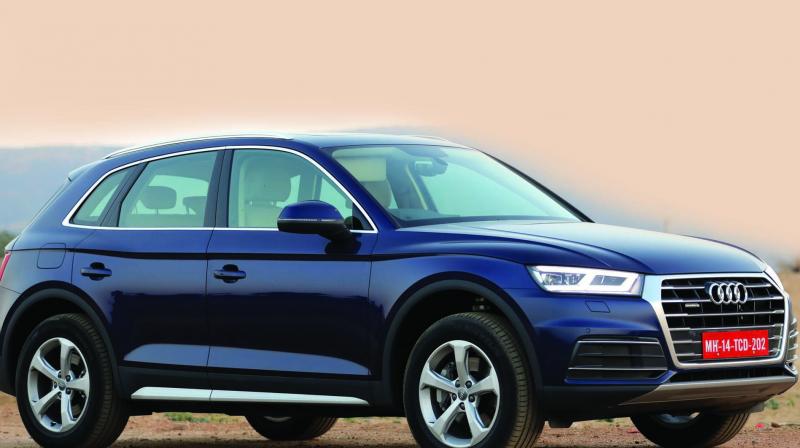 The Q5 is powered by a 1984cc, four-cylinder turbocharged petrol engine mated to a seven-speed dual-clutch transmission.

The petrol-powered cars have made a comeback in the luxury segments in India. German luxury car maker Audi has now introduced the second generation Audi Q5 model with the petrol engine.

The mid-size luxury SUV Q5 45 TFSI-badged 2.0 litre turbo-petrol motor produces a strong 252hp. It is the same engine that also does duty in the Audi Q7.

The Audi Q5 petrol is more or less identical to the diesel on the inside, so there is really nothing new to report. But it has got a well-finished cabin that is big on space and comfort. The dashboard is low and gives a good view out, the front seats are comfortable and you can also sit very comfortably at the rear.

Features
Like the Q5 diesel, the Q5 petrol is available in two trims — Premium Plus and Technology. Although, the feature-list is not class-leading for its segment in general, it has got a lot of kit. Equipment on the top-spec 45 TFSI Q5 Technology variant includes automatic headlamps and rain-sensing wipers, powered front seats with a memory function for the driver’s seat, three-zone climate control, digital instruments and smartphone connectivity compatible with Apple CarPlay and Android Auto.

Driving around
The Q5 is powered by a 1984cc, four-cylinder turbocharged petrol engine mated to a seven-speed dual-clutch transmission. The power is transmitted through Audi's Ultra Quattro all-wheel-drive system which transmits power to all the wheels when the car detects loss of traction.

The Q5 petrol is a fun car to drive with the adaptive suspension and the quattro grip and more power. There is a bit of vertical moment when you push the car hard around switchbacks, but it is quite predictable and never unnerving. The brakes are progressive and contribute further to the confident dynamics of this car.

Although, the Audi Q5 does feel slightly hesitant when starting-off, after building up the revs, the engine responds very well and the turbocharger kicks in at just above 2,200rpm with a surge of gratifying power. Shifting gears also become smoother whether you are driving on the highway or in the city. There is also a Sport mode keeping the engine in upper reaches of the powerband and giving the SUV readier power.

It’s quite stable at high speeds and agile enough for quick lane changes and attacking corners. The character of the Q5's suspension and the drivetrain can be altered using the various driving modes. So whether you are cruising on the highway, trotting in the city or having fun around the twists, there are the Eco, Comfort and Dynamic modes come in handy.

Should I buy one?
The Q5 is a handsome car comprising features like three-zone climate control, the virtual cockpit instrumentation, a panoramic sunroof, wireless charging, and safety technology like ABS, EBD, ESC, 8 airbags, tyre-pressure monitoring similar between both the variants. Interestingly, the petrol and diesel variants carry the same price tag at Rs 55.29 lakh. The choice is between the practicality of the diesel and the fun quotient of the petrol.