Bhattacharya says they have been part of Swachh Bharat Abhiyan since its inception three years ago. 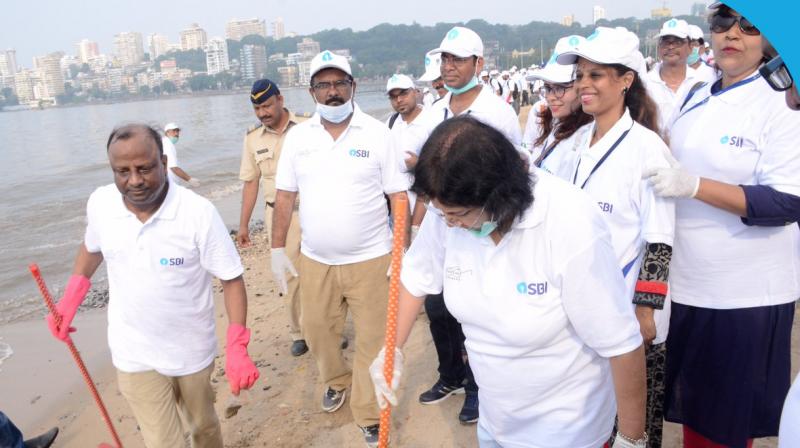 The team, led by their Chairman Arundhati Bhattacharya, gathered at Mumbai's Marine Drive beach to clean the area and get rid of all the plastic and other forms of waste in and around this.

SBI Chairman Bhattacharya, who revealed that they have been part of the cleanliness drive since inception, stated that if big organisations like SBI come forward and work together, the Prime Minister's mission can be fulfilled.

"We have built toilets in girl's schools in almost 14 districts in India, along with providing them maintenance contracts. Building toilets is not enough; people need to be taught how to use them as well," she told ANI.

All 24,000 odd branches of the bank along with over 500 regional centers have been instructed to participate in this cleanliness drive, she said.

"We have informed our pan-India branches to identify one main public place and clean up the area and its surroundings. Subsequently, we also need to focus on increasing awareness about cleanliness," said Bhattacharya.

On the 148th birth anniversary of Mahatma Gandhi, India pays tribute to the Father of the Nation and will organise cleanliness drives to promote 'Swachh Bharat Abhiyan', a flagship mission of the Central Government, to make people aware about the advantages of cleanliness, as the abhiyan completes its three years today.

"Cleanliness is Godliness" had been the mantra of Mahatma Gandhi's life.

Mahatma Gandhi, in his lifetime, demonstrated, propagated and insisted for individual and community cleanliness. Following his footsteps, the Government of India, led by Prime Minister Narendra Modi, launched 'Swachh Bharat Abhiyan' on October 2, 2014 with a vision of achieving 'Clean India' by 2019.

Prime Minister Modi then appointed several ambassadors from various walks of public life and assigned them the job of inspiring and motivating their fellow countrymen to keep India clean.

The drive to make India Open Defecation Free (ODF) is one of the key parameters in the Swachhta drive, for which the Union Government, along with various state governments, has been constructing toilets and urinals in the remotest areas of the country.

On the other hand, the school students countrywide will also participate in the cleanliness drives to pay homage to the Father of the Nation.