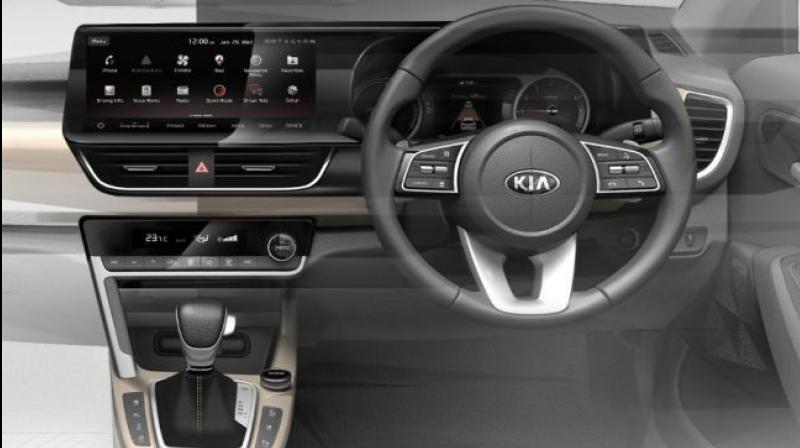 The sketches also reveal a massive coloured MID screen in the instrument cluster, a chunky steering wheel with multi-function buttons and even a HUD.

Kia Motors, which is set to launch the SP2i soon, has now released interior sketches of compact SUV. Based on the sketches, we can safely say that the SP2i will feature a plush cabin with several features.

Codenamed the SP2i, the SUV will come with a dual-tone dashboard which will get faux wooden inserts and brushed aluminium elements to give the cabin a premium appeal. It will feature a massive horizontally stacked 10.25-inch touchscreen infotainment display, with Android Auto and Apple CarPlay. The sketches also highlight Kia’s Sound mood lighting, a feature seen on lot of Kia cars sold globally, which changes the ambient lighting of the cabin according to the occupants preferences.

Apart from these key highlights, the sketches also reveal features such as automatic climate control, an automatic gearbox with paddle shifters, an electric park brake and an engine start-stop button.

The sketches also reveal a massive coloured MID screen in the instrument cluster, a chunky steering wheel with multi-function buttons and even a HUD. The SUV is also expected to feature adaptive cruise control.

Expected to be called either the Trailster or the Tusker, the new SUV from Kia will be powered by a set of BS6 complaint 1.5-litre diesel and petrol engines. Slated to be unveiled on June 20, the SUV is expected to make its debut in the country by September. When launched it is expected to be priced between Rs 10 lakh and Rs 16 lakh (ex-showroom) and will face stiff competition from the likes of the Hyundai Creta, Renault Captur and Maruti Suzuki S-Cross.