Tata Motors rolls out first Nexon off the factory 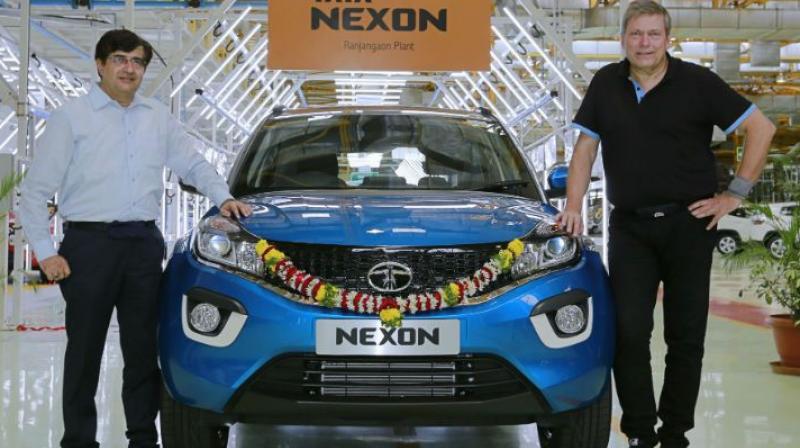 Tata Motors has rolled out the first batch of its first sub-4 meter SUV, the Nexon on July 20. The first units were rolled in the presence of the company's managing director and the president of passenger vehicle business. The Nexon will soon be dispatched to dealers across the country so that the potential customers can have a look at it. It is expected to be launched around the festive season and will primarily compete with the Maruti Suzuki Vitara Brezza and the Ford EcoSport.

The recent news comes just days after the company teased its upcoming SUV's side profile and revealed juicy details about the powertrains. Engine options for the Nexon include a 1.2-litre, 3-cylinder Revotron motor and a 1.5-litre, 4-cylinder Revotorq oil burner. Both the engines are turbocharged, make 110PS of power and come paired with a 6-speed manual transmission. The petrol engine makes a peak torque of 170Nm between 2000rpm and 4000rpm. The diesel mill delivers 260Nm from 1500rpm to 2750rpm.

On paper, both the engines appear to pack a punch and offer good bottom end torque that stays put to cover the entire mid range as well. It has a competitive advantage over the Maruti Suzuki Vitara Brezza and the Ford EcoSport in the performance department.

The Nexon seems like an excellent mix of practicality and performance. Tata promises an "unrivalled fuel efficiency" from the car. Forced induction, healthy bottom end torque and a tall sixth gear should help them achieve an impressive figure. We're expecting it to carry a tag between Rs 6.5 and Rs 9.5 lakh.